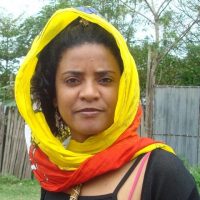 Kerima Ahmed is a full-time studio artist based in Los Angeles, California. She graduated from the Addis Ababa University School of Fine Art and Design in Painting. She also holds a Bachelor of Arts degree in Ethiopian Language and Literature. Since her graduation, she has been part of a number of group and solo art exhibitions both locally and abroad. Her work celebrates not only the values of Ethiopian people, but humanity as well. Kerima also contributed to, and helped establish, one of the most prominent artist groups in Addis Ababa: Nubia. Kerima’s paintings featured in this show are non-representational and her approach is reminiscent of the local traditional painting style. Her technique displays the Ethiopian traditional painting attributes like bold outlines, filled geometric shapes, and a limited color palette, and her versatile style recognizes the expressive potential of Ethiopian painting tradition. Her works have been exhibited in a solo show at the C Art Gallery entitled Ethiopian Artist Kerima Ahmed:Values and Dreams as Expressed through Line, Color and Texture, as well as a group show in Seattle. In 2013 and 2014, Ahmed’s work was featured at the Ethnic Gallery at the Municipal Tower, Columbia City Art Gallery and Tobya Art Gallery in Seattle.

“The things I like to paint come from the things that I see and what I thought. I don’t decide – oh this is something that I like. There may be things that I am drawn to depending on the situation and the period. For example when I graduated I was focusing a lot on Harare. And now there are forms that I take from life, from nature. I turn those to abstract forms – so I have moved on to a new style.” 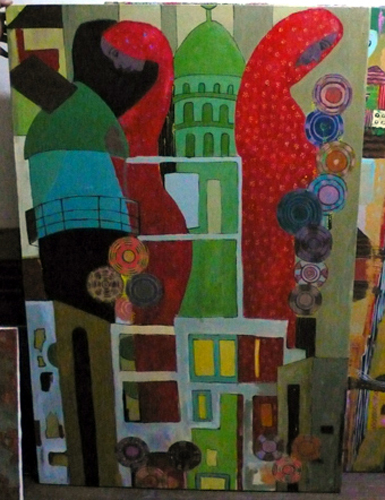