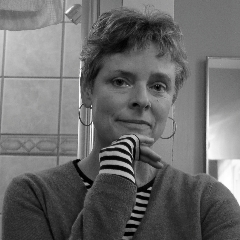 Kate Winn spent her childhood in the Hudson Valley, New York. The first painting that caught her attention as a child was a landscape by a Hudson Valley artist that hung in her grandfather’s living room, and she has been trying to recreate the luminosity and magical atmosphere in her own paintings over the years.

Winn received a Bachelor of Fine Arts degree in printmaking from Alfred University, New York, but that Hudson Valley painting still haunted her, and she began painting on her own. She moved to Portland, Maine and fell in love with the seacoast and began painting the scenes around her. Trips to Martha’s Vineyard and Cape Cod have also been inspiration for many of her small paintings. Winn doesn’t paint plein air, but instead paints in the studio using photos or sketches to build an idea and then lets her memory of the place and scene take over.

Winn’s paintings shimmer with a childlike innocence, evoking more a world of precious memory than substance. From the tiny, playing card scale to almost wall size, they are like windows to another place and time, where one encounters a language both personal and universal: boat, bird, and cup, and a little red-roofed cottage by the moon-lit sea. The paintings are of an imagined world, stopped in time, a story unfolding. 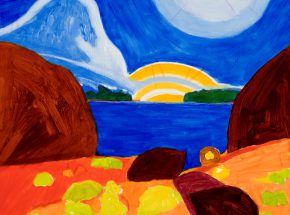