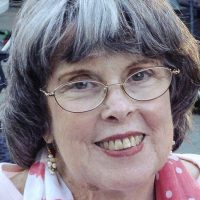 “To make a drawing is to engage in the thrill of mark making. The line leads me on a trip of discovery,” said painter Kate Curry Vahle. She created vivid and expressionistic landscape paintings and drawings of flora and fauna with close-up views of flowerbeds and tropical plants that contained expressive brushstrokes and vivid color palettes that dramatically depicted the moments and mysteries of the natural world. Her art career began and flourished in Washington, D.C., and San Jose, California. She earned a Bachelor of Arts degree in drama at Catholic University and studied art at American University, both in Washington, D.C. Vahle then moved to San Jose where she was named the 2004 Distinguished Artist by the city of Cupertino, California. Vahle was an active member of Christians in the Visual Arts and the South Bay Area Women’s Caucus for Art. Her paintings were showcased at the Fendrick and Foxhall Galleries in Washington, D.C., and the San Francisco Museum of Modern Art Artists Gallery in California. They have also been exhibited in the Washington/Moscow Art Exchange and in United States Embassies in Bolivia, Comoros, and Zaire (now the Democratic Republic of Congo). Public collections include the National Conference of Catholic Bishops and the Brookings Institution, both in Washington, D.C., and IBM.