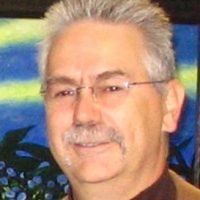 Karl J. Kuerner III is an American artist nurtured by Andrew Wyeth in the simplicity and greatness of the Brandywine tradition.

Nestled in the mystic hills of Chadds Ford, the Kuerner family settled in the early 1920’s first renting and then purchasing the large 1787 house and farm for their permanent home. Karl Kuerner, fought on the German side during WWI, leaving the Black Forest to start a new life after being seriously injured during the war. His brother, Cristof Kuerner was a well known painter, thus, when artists who were studying under the Brandywine tradition established by Howard Pyle, came to ask if they could paint on the Kuerner farm, Karl obliged. One of the many artists who frequently visited the farm was N.C. Wyeth. When N. C. Wyeth’s life was suddenly taken in the mid 1940’s by a train crash neighboring the farm, Karl ‘adopted’ the young Andrew Wyeth and supported his painting with an open invitation to the farm. Karl Kuerner (2) continued to maintain the farm and is still very active with the day to day maintenance and care of the animals and fields. Karl J Kuerner III in an interest to permanently preserve the legacy and heritage of the Kuerner Farm, donated the house and property to the Brandywine River Museum.

Karl J. Kuerner was born in Chadds Ford, Pennsylvania on January 12, 1957 – to Karl and Margaret Kuerner – third generation farmers. His artistic talent was recognized and nurtured at a very young age by Carolyn Wyeth – sister of Andrew Wyeth and a renowned artist in her own right.

Kuerner grew up surrounded by artists and the task of painting. From the age of seven he watched Andrew Wyeth paint some of his greatest works at the Kuerner Farm – Karl’s family homestead for three generations – and a major source of inspiration for more than 1,000 of Wyeth’s works of arts – and eventually over 300 of Kuerner’s own works.

“Wyeth looked at Karl Kuerner and said, ‘It’s up to you to carry this on. And it won’t be easy’. . . . Wyeth added, ‘Karl understands what I’m about: pure, deep, emotion. (1) Karl’s work is inspiring and deeply introspective . . . it exhibits a strong honest quality that comes from deep within and touches the ordinary in a profound way.’ ” (Excerpted from “The Mother of All The Arts: A Personal Journey Into Agrarian Sources of the Artistic Impulse” by Gene Logsdon, to be published by the University Press of Kentucky, Fall, 2006.)

Although Karl was initially influenced by the Wyeths, he is certainly not one of them – nor does he want to be. He is described by many as a fine painter of great merit – possessing his own intimate and straightforward style. He paints realistically using strong abstract shapes. He paints portraits of great variety – his wife in Heirloom, his neighbor in Dreams, his father wonderfully depicted in the landscape in Pennsylvania Farmer and mysteriously in the barn in Unloading Straw.
Karl J. Kuerner is an exceptional painter of great restraint – deeply immersed in the teaching and influence of his mentors – but also very absorbed and moved by his farming traditions and Pennsylvania ancestry. He has contributed greatly to the tradition of American realism, and will continue to be a major force in American art for years to come.

Karl’s latest interest in capturing the essence of his work has been realized in a current retrospective exhibit of the past thirty years of work at the Berman Art Gallery of Ursinus College. Mr. Kuerner is also continuing publications of his work, most recently with All in a Day’s Work…from Heritage to Artist by Gene Logsdon featuring Karl’s art. A previous work, The Mother of All Arts: Agrarianism and the Creative Impulse, explores the relationship between agriculture and art, with chapters on Brandywine Valley artists Karl J. Kuerner, the Kuerner Farm, Andrew Wyeth, N. C. Wyeth, and Peter Hurd. Citing the work of James A. Nelson, “…His depictions of the daily routines that confront the farmland life are an enriching experience to the novice and a tribute to the initiated. Through the eyes of three generations, the viewer will be drawn into this pristine and sylvan setting. Intertwined in these works are pictorial descriptions of the peripheral life and vitality of the Chadds Ford area. Repeated perusal of these works will make the viewer keenly aware that Karl J. Kuerner paints as he feels whereas others may paint as they perceive. In fact, an unsolicited endorsement of Karl’s paintings was proffered by Andrew Wyeth. One day behind the huge Kuerner barn on Ring Road, he and Andy were having a conversation when his mentor announced “you are painting as if you have something to say.”

Karl J. Kuerner has taken active interests with the area historical societies and museums with his quest for preservation as well as area art guilds, museums, colleges, universities, galleries, and schools for continuing education. Mr. Kuerner has taught at the Darlington Arts School for over thirty years helping young artists to develop their own talents and interests.