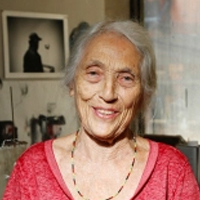 For nearly seven decades, June Leaf has created a deeply imagined world of unreal creatures and settings that metaphorically probe the human condition. She has worked in a long tradition of visionary art, one especially prominent in the work of the Symbolists of the nineteenth century and which has continued more recently with Surrealism and beyond. Born in Chicago, Leaf developed a connection in the 1950s to an important artistic group in the city, Monster Roster, who explored expressive figuration and had an interest in mythic narratives. She moved to New York in 1960 and established a studio in the remote town of Mabou, Nova Scotia, around the same time. Her style has evolved as she has expanded her range of materials over the years, while steadfastly mining and extending her canon of symbols and archetypes.