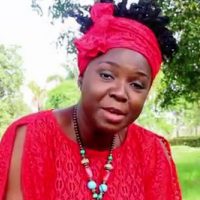 Juliet Ezenwa Maja Pearce, also known as Juliet Ezenwa (and nick named Painter by close friends and associates), was born in Benin City on July 30, 1968 to Mr and Mrs Patrick and Veronica Nze. She was first introduced to art forms by her grandmother, a reputable traditional body decorator using uli, the art and style adopted and made popular by the Nsukka School.
In 1969 (because of the Nigerian civil war) her family moved to their home town, Ashaka, a small fishing village and trading outpost of the United Africa Company. They remained there until 1973, three years after the war ended. Being the child of two working parents, she was always in the care of her grandmother. For want of how to keep the child occupied, she allowed her to paint a portion of the mud walls while she herself worked on the major walls. It was during these years that the young Juliet developed her interest in art.
After primary education, Juliet attended the Federal Government Girls’ College in Benin City, from where she gained admission into Bendel State University (now Delta State University), Abraka. Under the tutelage of Prof. Osa D. Egonwa, she acquired her distinct use of dark earth colours usually favoured by students of the uli movement.
In 1988, Sam Ovraiti, then a lecturer at the neighbouring Auchi Polytechnic, visited Abraka, during which time he met Juliet and immediately saw her passion for painting. After graduating in 1990, she went to Auchi to work with Ovraiti as his apprentice and artist-assistant, understudying his use of brilliant colours (which was synonymous with the Auchi School). In 1992, she teamed up with her close friend, Julie Ekhomu, to start the Tropical Arts and Craft Gallery.
At the gallery, she received firsthand experience in the art business, specifically art marketing, while also functioning as the in–house artist. The job itself was quite restrictive as it did not allow her much time for the creative process or for effectively participating in group exhibitions. However, she was able to keep producing works and had her first solo exhibition in 1993 at the IBB Golf Club in Abuja. In 1994, she left the Tropical Arts and Crafts Gallery and became Sam Ovraiti’s personal assistant. This position accorded her the much-needed space and time to practice her art. She remained in this position until 1999, in the course of which she held two consecutive solo exhibitions: Faces (1996) and Memories (1997). It was during this time that she also started the Nigeria Independence Day exhibitions. In 1998, she attempted to organise the first Abuja Fine Arts Bazaar, which was held at the Abuja Council for Arts and Culture.
In 2000, she left Sam Ovraiti Services and became a full-time independent studio artist. As such, she had more time for her personal and professional development and so began her partnering with NGO groups. Her passion for a better society drew her close to Project Alert and Echoes of Women in Africa, both of which sought to deal with domestic violence and youth development. In 2001, she partnered with the Rivers State Ministry for Youth and Social Development to run economic empowerment workshops for youths, which used art to advocate for social change. This subsequently gave birth to a series of solo exhibitions between 2001 and 2005, notably The Maiden Dance, Lost Innocence, Moonlight Rhapsody, and Reflections, along with a number of group shows.
Juliet was initially known for her sober watercolour paintings of landscapes and women. She participated in Tom Lynch’s Water Colour Rescue Workshop, and her landscape painting, Straying Goats, is published in his book, Great Watercolour Rescues. Her works have also featured in Jess Castellote’s Contemporary Nigerian Art in Nigerian Private Collections; other works have been used as book illustrations, notably Remembering Ken Saro-Wiwa and Other Essays and A Mask Dancing, both by Adewale Maja Pearce. She recently compiled the book, Issues in Contemporary Nigerian Art 2000-2010.
Since 2007, she has been a regular participant at the annual harmattan workshop run by the Dr Bruce Onobrakpeya Foundation and subsequently became a facilitator at the print-making section in 2012. She has since delved into experimental print-making to the extent that many of her more recent works apply printmaking methods, most notably in the Migrations solo exhibition.
Juliet is reputed to be a very hard working artist and a reliable facilitator. Since 2014, she has been involved in the Creative Young Minds art workshop, which takes place at her studio for primary and secondary school students.
Juliet has long been outspoken about human rights issues especially as it affects the girl-child and women. She is an executive member of Echoes of Women in Africa, and has been described as a child rights and gender activist. She is a regular participant at the UN-sponsored art exhibition on female genital mutilation.
Juliet is a member of Guild of Professional Fine Artists of Nigeria, the Society of Nigerian Artists, the Female Artists Association of Nigeria, Business and Professional Women International, and The Art Gallery Owners’ Association of Nigeria (organisers of Art-Expo Nigeria).
Speaking of her relationship to her art, Juliet has this to say, ‘My art comes from a very happy place. I am as happy as a sand girl when I am creating art. Whenever I encounter challenges relating to both life and art, I simply take my lemons and make lemonade.’ 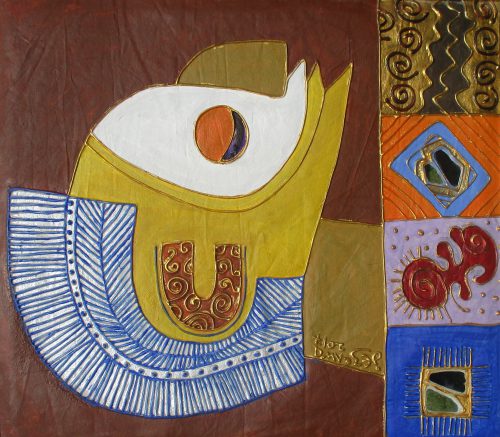 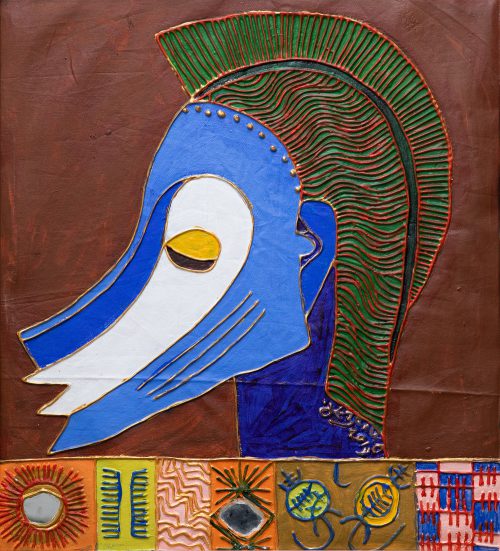