Before glass beads were introduced to the Plains by traders, the Sioux had perfected the art of using porcupine quills to decorate their clothes and belongings. The quills were dyed red, bright yellow, weak blue, bright orange, weak green and purple. Vegetable dyes were used until about 1880 when the whites traded aniline dyes and the colors became brighter and more varied. This quill-work was done on pipe bag fringe, knee bands, bustle ties and other large objects using the simple wrapping technique; the sewing and weaving methods were used for moccasins, pipes and feather decorations.

By the late 1880’s to 1890’s, the Sioux had a style of beading using certain colors and designs that were different than any other tribe. There are many techniques involved in making beadwork look like the style of a given tribe.

Not only colors and designs, but the method of beading, are very important. Sioux designs were mostly geometric, with some men’s beadwork that represented life around them, including figures, horses, and birds. After the 1890’s more intricate triangles and spidery designs were introduced. A careful examination of photographs and actual articles of Sioux beadwork reveals these characteristics: designs are geometric and usually symmetrical; designs cover most of the background; many lines and geometrical figures are held together by a central design; triangles and lines with three-pronged forks are often featured; large expanses of background broken up with lines and crosses; small squares are added to crosses, lines and larger squares; small designs are added to give a finished look to the whole design. 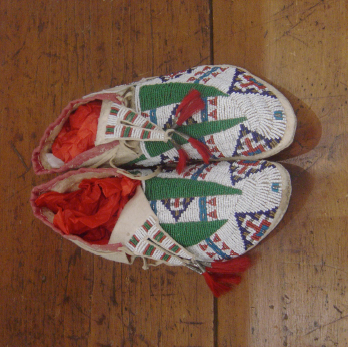