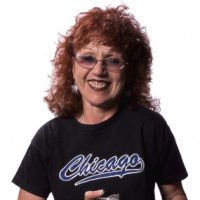 Judy Chicago is an artist, author, feminist, educator, and intellectual whose career now spans four decades. Her work and life are models for an enlarged definition of art, an expanded role for the artist, and a woman’s right to freedom of expression. She was born in Chicago, Illinois in 1939.

Her influence both within and beyond the art community is attested to by her inclusion in hundreds of publications throughout the world. Her art has been frequently exhibited in the United States and internationally.

During the period from 1965-1973, Chicago explored color through much reduced geometric shapes by producing sculpture, drawings, and paintings that comprised her Minimal period. These works were formulative to her landmark “spectral color” theory that has informed all of her subsequent work.

In the early seventies, after a decade of professional art practice, Chicago pioneered Feminist Art and art education through unique programs for women at California State University, Fresno, and the California Institute of the Arts where she helped establish the Feminist Art Program which resulted in Womanhouse, the first installation demonstrating an openly female point of view in art. Chicago’s ideas helped to initiate a worldwide Feminist Art Movement.

In 1974, Chicago turned her attention to the subject of women’s history to create her most well-known work, The Dinner Party, executed between 1974 and 1979 with the participation of hundreds of volunteers. This monumental multimedia project, a symbolic history of women in Western Civilization, has been seen by more than one million viewers during its 16 exhibitions held at venues spanning six countries.

The Dinner Party has been the subject of countless articles and art history texts. In 2007, The Dinner Party was permanently housed at the Brooklyn Museum as part of the Elizabeth A. Sackler Center for Feminist Art, thereby achieving Chicago’s long-held goal of helping to counter the erasure of women’s achievements.

From 1980 to 1985, Chicago worked on the Birth Project, in which she designed a monumental series of birth and creation images for needlework which were executed under her supervision by skilled needle workers around the country.

Later, in a series of drawings, paintings, weavings, cast paper, and bronze reliefs, Chicago brought a critical feminist gaze to the gender construct of masculinity, in a project entitled Powerplay. The artist’s long concern with issues of power and powerlessness, and a growing interest in her Jewish heritage led her to her next body of art, the Holocaust Project: From Darkness into Light, which premiered in October, 1993. Selections from the Holocaust Project continue to be exhibited. 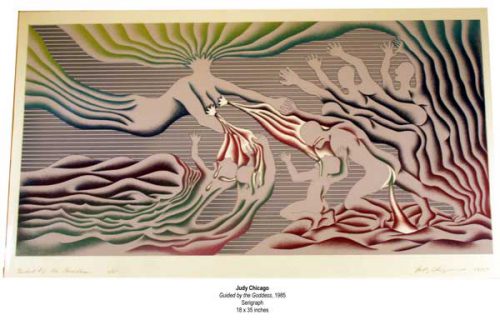 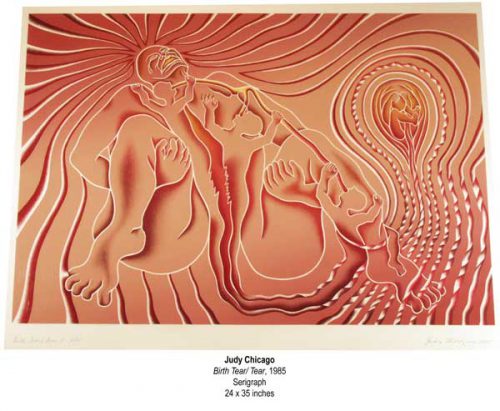 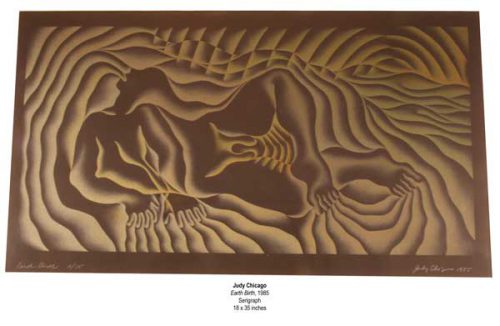 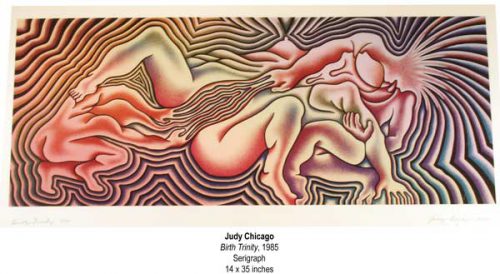 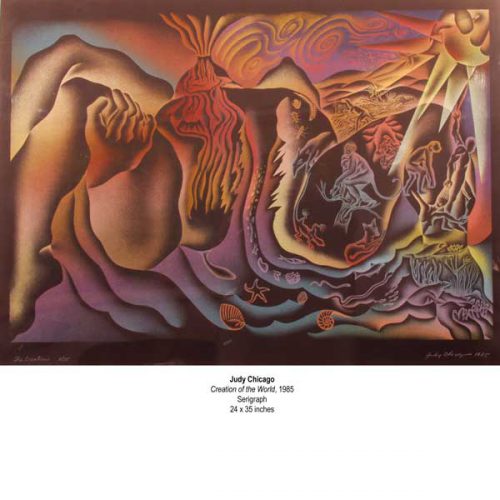