Joseph Baermann Strauss was a German-American structural engineer and designer.
He was born in Cincinnati, Ohio, to an artistic family of German origin, having a mother who was a pianist and a father who was a writer and painter. He graduated from the University of Cincinnati in 1892, serving as both class poet and president. Strauss graduated with a degree in economics and business. Upon graduating from the University of Cincinnati, Strauss worked at the Office of Ralph Modjeski, where he began to innovate the design of bascule bridges. He was Chief Engineer of the Golden Gate Bridge in San Francisco, California. He placed a brick from the demolished McMicken Hall at the University of Cincinnati in the south anchorage before the concrete was poured. Strauss was also designer of the Burnside Bridge (1926) in Portland, Oregon and the Lewis and Clark Bridge (1930) over the Columbia River between Longview, Washington, and Rainier, Oregon. He also wrote a poem saluting the Sequoia of Northern California and Southern Oregon. His love for bridges came from a hospital stay when he was in college. His room overlooked the Cincinnati-Covington bridge which sparked his interest in bridges. He died in Los Angeles, California, just one year after the Golden Gate’s completion. His statue can be seen on the San Francisco side of the bridge.
As Chief engineer of the Golden Gate Bridge, Strauss overcame many problems. He had to find funding and support for the bridge from the citizens and the U.S. military. There were also innovations in the way the bridge was constructed. It had to span one of the greatest distances ever spanned, reach heights that hadn’t been seen in a bridge, and hold up to the forces of the ocean. Strauss was also concerned with the safety of his workers. He required that a net be installed beneath the Golden Gate Bridge during construction. This net saved a total of 19 lives. In fact, Charles Alton Ellis was chiefly responsible for the structural design of the Golden Gate Bridge. Because of a dispute with Strauss, however, Ellis was not recognized for his work when the bridge opened in 1937.
www.wikipedia.com 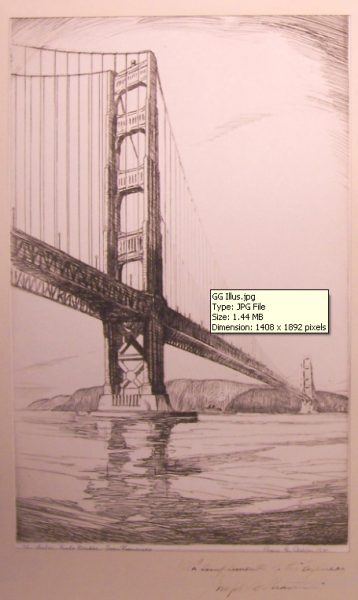