Johansen came to America as an infant. He studied in Cincinnati under Frank Duveneck[1] and later at the School of the Art Institute of Chicago where he taught from 1901 to 1911. While a member of the faculty of the Art Institute he met, and later wed, recognized portraitist M. Jean McLane (1878–1964). Before focusing primarily on portraiture Johansen painted landscapes. In 1915 he was elected to the National Academy of Design.

Leaving Chicago in 1919, Johansen moved to Paris where he studied at the Académie Julian where he learned academic technique while being exposed to the ideas of modernism. He maintained friendships with other artists including James Abbott McNeill Whistler and John Singer Sargent.

At the conclusion of World War I, Johansen was commissioned by the U.S. government to document the signing of the Treaty of Versailles which today hangs in the National Portrait Gallery, Smithsonian Institution. Other portraits include an official White House portrait of President Herbert Hoover, official Vermont State House portrait of Governor Percival Clement, two works in the United States Capitol, and works in the collections of the Dallas Museum of Art, National Gallery, Pennsylvania Academy of the Fine Arts, Metropolitan Museum of Art, the National Academy of Design, the Art Institute of Chicago and the Richmond Art Museum. 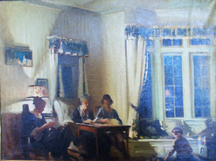