Born in Morristown, New Jersey, John Gamble, influenced by French impressionist painter, Claude Monet, is known for his California floral coastal and landscape paintings, especially fields of poppies and lupines. From Santa Barbara, he was one of the leaders of the California plein-air painting movement, and he was also a successful portrait painter. Another favorite painting subject was coastal views of Pacific Ocean sunsets, and judging by his auction records, he occasionally painted in Arizona and Utah. One of his closest painting companions was Elmer Wachtel.

His father worked for a steamship company, and as a teen teenager, Gamble moved with his family to Auckland, New Zealand, and then in 1883, when he was age 20, he went to San Francisco. There he trained with Virgil Williams and Emil Carlsen at the San Francisco School of Design. Following this period, he went to Paris to study at the Academie Julian with Jean Paul Laurens and Benjamin Constant.

Gamble opened a studio in San Francisco but relocated to Santa Barbara after his studio was lost in the big fire in 1906. For twenty-five years, he was color consultant for the Santa Barbara Board of Architectural Review but made a good living from the sale of his paintings. For the opening of the Fox Arlington Theatre in Santa Barbara, he created a huge panoramic landscape on the stage curtain. 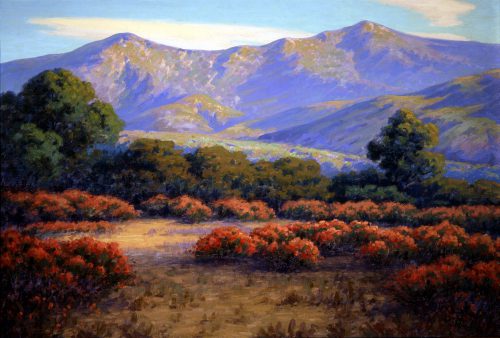