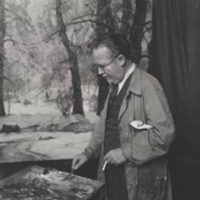 John Fabian Carlson was born in Sweden, and at the age of twelve moved with his family to the United States, settling in Buffalo, New York. His formal training began at the Albright School of Art, and in 1902 he earned a scholarship to the Art Students League in New York City. Following his two years of study there, Carlson went to Woodstock, New York, with a scholarship to study at Byrdcliffe, a fledgling art colony later known as the Woodstock Artists Association. In 1906 Carlson, who was then a member of the Art Students League’s Board of Control, was instrumental in the decision to move the League’s summer school from Connecticut to Woodstock. He became the summer school’s director in 1911, a position he retained until his retirement in 1918. In June of 1920, Carlson and his family moved to Colorado Springs, Colorado. He was appointed Director of the newly established Broadmoor Academy and spent two summers there teaching landscape painting. In 1922 Carlson returned to Woodstock, where he established the John F. Carlson School of Landscape Painting. Three years later, he was elected a full member of the National Academy of Design. In 1928, Carlson published an instructional book titled Elementary Principles of Landscape Paintings. The book was reissued as Carlson’s Guide to Landscape Painting in 1953, with reprintings in 1958 and 1970. 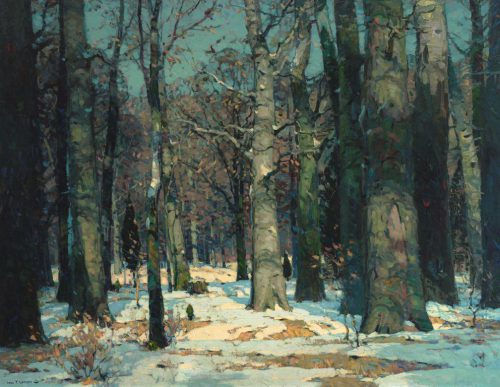