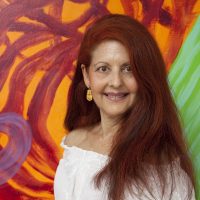 Joan Thorne is a New York-based conceptual artist who deeply explores the relationships between forms and esoteric shapes in her canvases. Taken from her subconscious and experiences in avant-garde plays during her undergraduate career, her paintings contain a vibrant color palette and sharp boundaries with large masses and radiating, swirling waves. The neo-expressionist artist employs juxtaposition between hot and cold colors in one space and paints her floating motifs with faint, zigzagging brushstrokes, epitomizing mysticism and depth without illusionism. Thorne’s oeuvre can be interpreted as bringing new life to abstract expressionism, arising during a cacophony of historical civil rights movements and artistic styles ranging from pop art to minimalism.

Raised in Greenwich Village by Ukrainian parents, her early interest in art emerged during her time at the Little Red Schoolhouse on Bleecker Street, where she interacted with creative children who would become actors, musicians, and artists.  She earned her Bachelor of Science degree at New York University and Master of Arts degree at Hunter College in New York.  Thorne came into renown starting in 1973 with a solo exhibition at the Corcoran Gallery of Art, Washington, D.C. She has since hosted other one-woman and group shows in art institutions, namely the National Arts Club, New York; Société des Artistes Indépendants, Paris, France; and Guernica Galeria de Arte, Santo Domingo, Dominican Republic. Her work has been exhibited twice at the Whitney Biennial, New York, and once at the Biennale Internazionale Dell’Arte Contemporanea, Florence, Italy. Thorne has received praiseworthy reviews from The New York Times, Art in America, and ARTnews. She won awards and grants in painting from the Pollock Krasner Foundation, Prix de Rome in Visual Arts by the American Academy, and the Adolph & Esther Gottlieb Foundation. 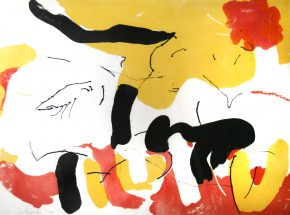