Ferdinand Richardt was attracted to the scenic and historic wonders of the United States in the middle years of the nineteenth century. He was born at Brede bei Lyngby in 1819 and studied at the Royal Academy, Copenhagen. The best known of his American paintings were the many views of Niagara Falls that he painted in the mid-1850s. These he placed on exhibit in New York City along with Swedish and Danish landscapes in the autumn of 1856. Three years later, in January 1859, he mounted his “Exhibition of American Scenery” in the galleries of the National Academy of Design. Included in this display were views of Lake George, Grace Church in New York City, the Catskill Mountains, and, among southern scenes, the Mississippi River, Mammoth Cave in Kentucky, and Virginia’s Natural Bridge.

Richardt’s Southern travels also found him on the Potomac River, where he painted Mount Vernon and the town of Harper’s Ferry at the confluence of the Potomac and the Shenandoah. By 1873 Richardt was living in Oakland, California. He subsequently moved to San Francisco, where he died on October 29, 1895. 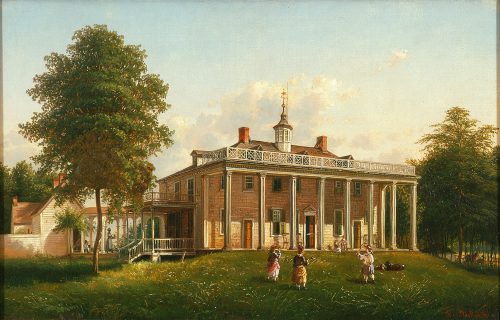