“Stampede” artist Jerry Palen was born in Paris, Tennessee, on July 9, 1941. At the end of World War II the family moved to Cheyenne, Wyoming, where his father worked as a large animal veterinarian for thirty-two years. The young Palen grew up surrounded by the experiences and stories of Wyoming agriculture. Despite an early aptitude for art, Palen earned his Bachelor of Arts degree in economics from the University of Wyoming in 1969. He, his wife, Ann, and their sons owned and operated a Wyoming ranch for several years. Today Palen and Ann reside in Saratoga, Wyoming, and operate the Saratoga Publishing Group. His “Stampede” has the largest circulation of any rural cartoon series in the U.S. and Canada.

Palen’s work can be found in numerous private and public collections, and has earned the artist many awards. The bronze, Good Job, Pal, won the 2001 Artists’ Choice Award. Of this work, the artist has remarked: “Was it C. M. Russell or was it Frederick Remington or was it Aristotle who said, ‘the outside of a horse is
good for the inside of a man?’ Anyway, they should have added, ‘the companionship of a dog makes life perfect!’ Reading a passage from Some Horses, the latest book by Thomas McGuane, my favorite contemporary author, reminded me of the time I had gotten caught in one of those bitter cold Wyoming rain storms. It was just me and my dog and about a hundred yearlings, and after the storm had passed ‘Murphy’ had come up to me, foot sore and afraid of the lightning, and had asked for a scratch on the head for reassurance that everything was all right…Gosh, how I cherish those moments.” 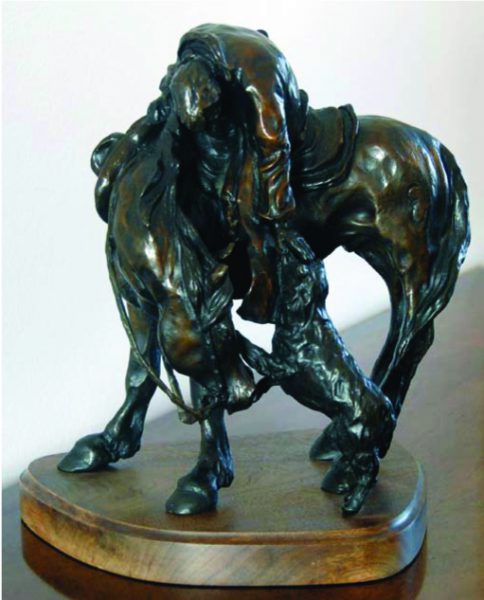