Since resuming painting in 1990, my primary focus has been on landscape. During the summer of 1992, I began a series of paintings on large canvases that were of confined views that depicted few distant objects and allowed for only small patches of sky, if any, that gave a precise illumination for the near objects in the painting. Called the “River Series,” these paintings were done mostly on site in one or two sessions.

As typified by Blackwater River in May, the river paintings did not by the nature of their execution run to extremes of light and shadow. Texturally, these paintings bore some resemblance to Impressionism, but they were really grounded more in Realism. That is, the work was more about the physical aspects of rock and water and foliage than it was about atmosphere and light.

It was not until 1998, following a serendipitous viewing of a Goodrich Roberts’ retrospective in Canada, that I began painting landscape again in earnest. It was not a particular style or sentiment that inspired me, but rather an awareness of that painter’s arcane communications via his medium that redirected (or relocated) my own fundamental preoccupations with paint. A painting done in the fresh experience of finding Goodrich Robert’s work, of a sunset over a lake in a turbulent October sky, intrigues me to the extent that the effort was repeated. Again and again.

Horse Point is representative of that series in that it is done in a manner that is more apparently Expressionistic than Impressionistic and is less preoccupied with an attention to detail that is evident in the “River Series.” 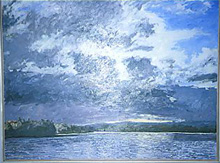 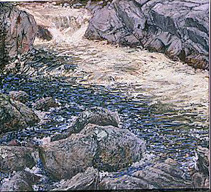