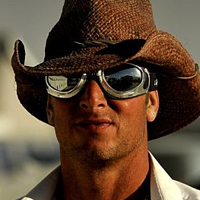 During his adrenaline-filled career Jeremy Lock was named Military Photojournalist of the Year seven times, awarded the Bronze Star Medal for distinguished service in Iraq, and documented battles, disasters, and everyday life in Afghanistan, Iraq, Japan, Haiti, Mongolia, and many other locations. At every step Lock has been there with camera in hand, steadily and skillfully documenting what we might otherwise never see.

“My photographic journey is rooted in my ability to capture the essence and reality of humanity at its finest and at its worst,” said Lock. “I’ve captured everything from the hunt for Osama bin Laden, to the playful nature of our young military defending our freedom, and the plight of humans in search of food after the Haiti earthquake disaster.”

“Not only do I get to live my life, but I’ve been able to live the lives of those I photograph, even if it was just for a moment,” notes Lock. “I thrive on sharing my experiences to remind myself and others that what I am doing is very important…the world needs to see it. I like to think the experiences haven’t changed me, but I know they have, and I’m thankful for that change. There is more to the world than what is outside your front door.”

In addition to his current “Twenty-One” exhibition, Lock’s experience as a seasoned photojournalist has led to his work being published in such magazines, newspapers and books as National Geographic, Time, New York Times, The Washington Post and many more. His work has earned multiple awards from prestigious organizations including World Press Photo, National Press Photographers Association, Oasis, among many others.