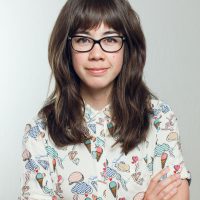 Jenny Odell is a multi-disciplinary artist whose work examines the infrastructures and ecologies at the heart of the everyday, often resulting in collections that invite comparisons to natural science. The sources of Odell’s
“specimens” range from Google Earth imagery and YouTube tutorials to neighborhood flowers and discarded objects at the San Francisco dump. This work materializes in prints, books, websites, walking tours, and recently, as a mural on the size of a Google data center. It has been exhibited at the Yerba Buena Center for the Arts, the Contemporary Jewish Museum, Intersection for the Arts, Ever Gold, the Richmond Art Center, the Pratt Manhattan Gallery, apex (NYC), the New York Public Library, Les Rencontres d’Arles, Fotomuseum Antwerpen, East Wing (Dubai), and the Li Shui Photography Festival. Odell has been in an artist in residence at Recology SF, Facebook, YBCA, the Palo Alto Art Center, and the Internet Archive. She currently teaches digital art, design, and internet art at Stanford University.

You can see from pole to pole and across oceans and continents and you can watch it turn and there’s no strings holding it up, and it’s moving in a blackness that is almost beyond conception.
-Eugene Cernan, an astronaut on the Apollo 17, on seeing the Earth from space

“In much of my work, I collect things that I’ve cut out from Google Earth. The view from a satellite is not a human one, nor is it one we were ever really meant to see. But it is precisely from this inhuman point of view that we are able to read our own humanity, in all of its tiny, repetitive marks upon the face of the earth. From this view, the lines that make up basketball courts and the scattered blue rectangles of swimming pools become like hieroglyphs that say: people were here.

The alienation provided by the satellite perspective reveals the things we take for granted to be strange, even absurd. Banal structures and locations can appear fantastical and newly intricate. Directing curiosity toward our own inimitably human landscape, we may find that those things that are most recognizably human (a tangle of carefully engineered water slides, for example) are also the most bizarre, the most unlikely, the most fragile.
The structures in 681 Observatory Domes, Telescopes, and Other Structures for Long Range Observation are collected from 43 different countries and include important sites in typically barren locations – like the 1000-foot-wide radio telescope in Arecibo, Chile, the observatories atop Mauna Kea, and the Very Large Array in New Mexico. But also included here are the small observatories, often found in a field on the edge of town or attached to a high school, that represent the efforts of astronomy clubs and curious amateurs. These observatories are sometimes also memorials; many of them are named after local scientists.

More than a document of observatory locations, this collection is meant as a meditation on observation and the poetic qualities of scale. I’ve configured the domes into their own constellation; the sizes of the domes are not reflective of actual size, but of resolution in that area of Google Maps (the size that was available at the most zoomed-in level). I’ve also, in cutting these out, stayed true to the way they appear on Google Maps, so some of them are distorted in ways that betray the 3D mapping that captured them. In that sense, this print is as much about imaging as it is about images.” 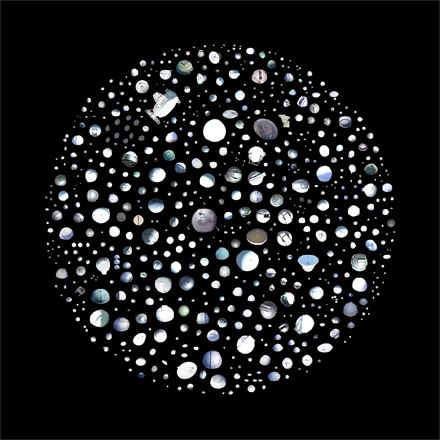