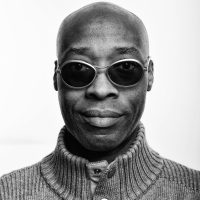 “My recent artworks reflect critically on the way mass media is used to convey social agenda. Among other concerns some of the paintings manifest judgmental, censorious ways of life and the many oxymoronic extensions in our so-called union. Visually, these paintings explore the relationships between the abstraction and the representational with an easily recognizable urban prospective. Using acrylic paint, oil stick, collage, sand, cement, and blends of mixed media, usually starting with an abstract field of energy, followed by added elements such as drawn images culled from sketchbooks as well as from my imagination. The end result is loose narrative paintings using bold contrasts of deep, strong colors with a mixed word usage of reversed type as the principal process.

The use of reverse type as an element and operative device within the paintings serves as a signifier of personal as well as societal conflict. This element in these paintings conveys both informational and symbolic readings. Reverse type becomes an entry point into hidden (yet parallel) worlds that hints at the struggles some members of society have in reading a simple word. By extension this alludes to a dimension of disenfranchisement, separation and humiliation endured by individuals who through no fault of their own feel isolated and disconnected from the world around them, a world they otherwise feel strongly attached to.

These artworks project my observation of the disparity in cultural, economic, educational, and political agendas throughout our society that often lead to conflicting social practices and irreconcilable tensions within the body politic. While examining tribal identification and its crisscross of connotations as an African-American artist, I also offer the viewer insights into an accurate account of the many often-contradictory aspects of contemporary culture. Simultaneously, pointing to conditions that hamper self-awareness and thus create self-consciousness while suggesting how such conditions shape the possibility or denial of self-actualization.”

Jeffrey Kent was born in 1963 in Boston, Massachusetts and currently lives and works in Baltimore, Maryland. Kent earned his Master in Fine Arts degree from the prestigious Hoffberger School of Painting at the Maryland Institute College of Art in 2010, and is known for “some of the most spectacular use of color I’ve ever seen”, according to Rebecca Hoffberger, Founder and Director of the American Visionary Art Museum. As a painter, Jeffrey’s artistic vision is an important contribution to the continuous spectrum of urban cultural expression and identity.

In 2003 Kent founded Sub-Basement Artist Studios a 12,000 square foot underground, artists’ studios and gallery space located in downtown Baltimore. In 2008 he was awarded Best Visual Artist by Baltimore City Paper and received the Joyce C. Scott Exhibition Award. In 2003 he was the recipient of the City Arts Grant. He was featured in Baltimore’s 2008 Top Ten Artist list by the Examiner. Since 2001, Kent has participated in numerous group exhibitions in Baltimore, Chicago and Washington, D.C. One of his career highlights was participation in the exhibition “Ten Years After 9/11” held at the Pepco Gallery in Washington, D.C. It featured the work of thirty-nine international artists commemorating the tenth anniversary of the event of September 11, 2001. The exhibit was co-curated by Helen Frederick and William Dunlap. His solo exhibitions included “Preach “held at the Frederick Douglass-Isaac Myers Maritime Museum and “Good, Bad and Ugly” shown at the Creative Alliance in Baltimore, Maryland; and “Jeffrey Kent Recent Works” featured at the DesignSmith Art Gallery in Chicago, Illinois.