“I paint outdoor subjects, and I spend many hours wandering and looking through a viewfinder until I find just what I want. The composition has to be there. I rarely invent a composition. Whatever it is has to be balanced in a certain way, and the colors and textures, and shapes have to be “right.” The balance and the “rightness” don’t lend themselves to words. After I have been working for a number of hours, I may begin to change colors, textures, and other visual elements, because my idea of what I want from the subject may change. I am thinking abstractly. Often the subjects-people, streets, dogs, trees-may not matter to me at all, as long as they carry the visual qualities that I think the picture needs. People have told me that my figures are often underdeveloped.. That may be true, and if so it is because I want them to fade somewhat into the landscape-even if they are front and center– and become part of it rather than dominate it. This reflects hunches or wishes (whether you would call them aesthetic, philosophical, or even religious, I don’t know) I’ve had for years concerning people and the rest of the world.”

James Williams received his art education at the Pennsylvania Academy of the Fine Arts, Philadelphia; The Barnes Foundation, Merion, Pennsylvania; and the University of Delaware, Newark. His work has been the subject of numerous solo, group, and juried exhibitions, and has received several awards. 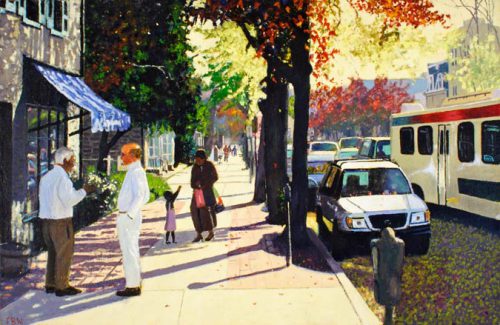