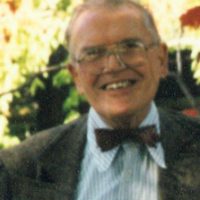 James McKinnell was one of the most influential American potters of the twentieth century, an innovator of ceramic technology. McKinnell developed a flat-topped, loose-brick kiln, which changed the way studio potters worked because of its portable nature. Fueled by a propane burner, the transportable kiln could be adjusted to adapt to the size and type of firing desired. McKinnell utilized his aesthetic sensibilities and scientific background to create new glazes and clays. As the artist stated, ceramics can provide “a sense of control over one’s destiny that can be felt through the crafts.”

Originally planning to study architecture, McKinnell received a Bachelor of Science degree in Ceramic Engineering in 1941 from the University of Washington, Seattle; he would later earn a Master of Science degree there in 1947 after serving in the United States Navy at Pearl Harbor during World War II. McKinnell met Nan Bangs at the university during a slip-casting seminar led by Swiss artist Paul Bonifas, while she was earning her Master of Arts degree in ceramics. Nan would become a prominent ceramicist and important collaborator throughout his life and art career. After the couple married, McKinnell briefly worked at a porcelain insulator company owned by General Electric in Baltimore, Maryland. Using his G.I. Bill money, he studied abroad in Europe for a year with the giants of the twentieth-century ceramic world. He first ventured to Paris to attend the Ecole Métiers d’Art, then to England for a private tutorship under Michael Leach, son of studio potter Bernard Leach, at the Penzance School of Art, and finished with his studies at Edinburgh College of Art in Scotland with ceramicist Kathleen Horsman. After his European travels, McKinnell was an engineer for The Boeing Company in Seattle for eighteen years. He taught at Colorado State University, Fort Collins, and received a Lifetime Achievement Award from the Colorado Gallery of the Arts in 1988. His ceramic works are housed in museum collections, namely the Victorian & Albert Museum, London, England, and the Museum of Contemporary Crafts, New York.