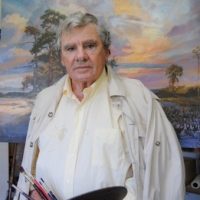 Born in 1932, James F. Hutchinson was destined to become one of the great American impressionist landscape artists of the century. After receiving his first commission in 1948, he began to study the beauty of Florida’s natural surroundings. While attending Florida State University, he met the love of his life, Joan Austin. Soon after, he served a term in the United States Navy during the Korean War. Upon his return to the U.S., he began what was to become a lifelong devotion to the arts.

Once married, James and Joan Hutchinson went to study and live with the Seminole Indian Tribe on the Brighton Reservation in Florida where they remained for the next six years. In 1962, he received a grant from The Arthur Vining Davis Foundations to produce a total of fifty paintings over five years depicting the lives of the Seminole Indians. As a result of his intimate understanding of the people and places of Florida, James Hutchinson was chosen to represent the State of Florida during the World’s Fair in New York City in 1965, and afterwards, his reputation spread across the country.

Over five decades, James Hutchinson has earned collectors from all fifty states, Canada, Europe, South America, Japan, and elsewhere. His paintings can be found in private galleries and museums worldwide. His subjects vary from tropical landscapes, to Native Americans, to personal portraits, and continue to win audiences around the world. 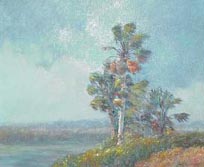 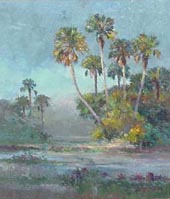