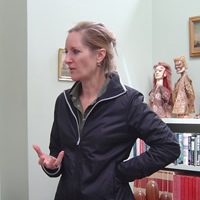 New Orleans painter Jacqueline Kay Bishopis an artist who has created a remarkable body of work that has taken her to developing countries, Latin American rain forests, and Louisiana’s swamplands alone and with scientists to document flora, fauna, birds, orchids, deforestation, and ecopolitical injustices, particularly in Brazil, Bolivia, Venezuela, and Peru. Whether exploring exotic jungle blossoms, endangered birds, or destroyed rain forests, Bishop’s paintings tap deeply into our cosmic notions of the primordial landscape. Her work is about death and rebirth, tranquility and destruction, light and dark, and humankind’s lost intimacy with nature.

Born on October 1, 1955, in Long Beach, California, Bishop grew up in Long Beach; Denver, Colorado; and Kansas City and St. Joseph, Missouri; spent summers with relatives in rural Wisconsin; and lived in the Dominican Republic before moving to New Orleans in 1975. He father was from St. Joseph and a master artisan who worked in stone. Her mother was from a large Norwegian farm family in Wisconsin. Bishop studied art and philosophy at the University of Kansas and later went on to obtain a bachelor’s degree in painting at the University of New Orleans and a master of fine art degree at Tulane University. While in graduate school, she worked in art conservation and taught private art lessons. Over the years she taught art at Tulane and Loyola University. She also served as a producer and interviewer on Louisiana Artist, a program that aired on WWNO, a National Public Radio affiliate in New Orleans. There she interviewed contemporary artists about their work.

Bishop recalled wanting to be an artist most of her life. “With the exception of a possible life as a writer, I never wanted to be anything else but an artist,” she wrote. “I remember my first art piece at the age of five, a painted, ceramic lizard.” As to artists who have influenced and inspired her, she considers her “select art historical family” to include Ana Mendieta, Hieronymous Bosch, Pieter Breughel, Rachel Ruysch, Johannes Vermeer, Vincent Van Gogh, Francisco Goya, Kathe Kollowitz, and “almost everyone in the surrealist movement,” including Max Ernst, Dorothea Tanning, Frida Kahlo, Leonora Carrington, Remedios Varo, Joseph Cornell, Anselm Kieffer, and Bette Sayre. “These artists opened me to the importance of current social issues, political consciousness, and humanity in art, otherwise it is decoration,” she says.

In major series such as Terra,Intimo, and Trespass, ecopolitical and social forces are at the forefront of Bishop’s work. She once described her motivations and the issues that trigger her imagination and ire: “My work explores the politicizing of nature, species extinction and ecopolitical injustice influenced by thirty years of traveling developing world countries.… In 1975 I lived in the Dominican Republic near a povertystricken area across the road from a primal rainforest where small children looked for food and had swollen stomachs and malnutrition and worms. I witnessed large construction companies destroy acres of old growth trees to replace with new, inappropriate development. In later years, I documented deforestation in South America, North America and Asia. In 2005, I experienced the human and nonhuman devastation from Hurricane Katrina in New Orleans. In 2010 I witnessed the disastrous results by the BP oil spill in the Gulf Coast. It would be impossible to return to the studio and not be creatively affected by what happened to the environment.” The installation Terra, she explained, is her “memorial to the natural world.” Another series was a tribute to Chico Mendes, the slain Brazilian rubber tapper, trade union leader, and environmentalist.
Bishop has received grants from the PollockKrasner Foundation, the Joan Mitchell Foundation, the Louisiana Division of the Arts, and a scholarship from Tulane University Graduate School. Her work is included in the AlbrechtKemper Museum of Art in Kansas City, Missouri; the Claiborne House Collection in Baton Rouge, Louisiana; the New Orleans Contemporary Arts Center; Gongju National Museum in Gongju, South Korea; the Historic New Orleans Collection; the Huntsville Museum of Art in Huntsville, Alabama; the Kalamazoo Institute of Art in Michigan; Loyola University in New Orleans; the New Orleans Museum of Art; Pennsylvania Academy of Fine Arts in Philadelphia; the Pensacola Museum of Art in Florida; the Spencer Museum of Art in Lawrence, Kansas; the Springfield Museum of Art in Missouri; the Nature Conservancy in Baton Rouge; and the Ogden Museum of Southern Art in New Orleans. 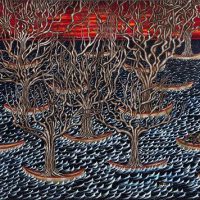