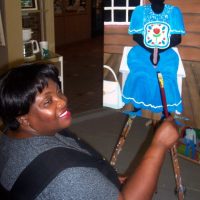 Irene Tison was born in Jasper County, South Carolina, in the late 1950s to parents who were still sharecroppers. She remembers the cotton fields that her family planted, especially the harvest times. Some of her twelve older sisters and brothers helped her parents with both the planting and the harvesting of crops. Tison started drawing before she entered the first grade and was guided in her artistic efforts by her mother Mary Bell. A self-taught “outsider” artist, Tison began painting the Gullah life she saw around her when she was six years old. She remembers that her mother would come home from the fields and relax by sketching the world she knew as a child. Tison would sit at her mother’s feet and watch her make a plain piece of paper come alive. Tison believes every canvas is a dream waiting to be awakened to a painting, and everything that is seen is a world of joyful colors you don’t see until it becomes a painting.
www.redpianotoo.com
Tison recently relocated her Savannah, Georgia, studio to Backstreet Gallery in Lancaster, South Carolina. She is a member of the South Carolina Artisans Center in Walterboro, where her work was featured in the 2009 movie “Nights in Rodanthe.” Widely exhibited in the Low-country, her paintings can also be seen at Avant Garde Center for the Arts, Great Falls, South Carolina, as part of Lancaster County Council of the Arts Marian Hagins Exhibition, where she was an award winner.
www.bobdoster.com 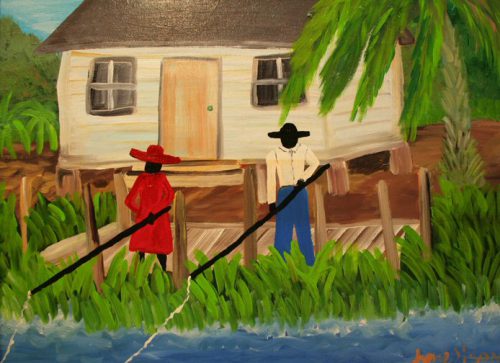 Irene Tison, Fripp Island: A Day to Fish, Acrylic on canvas, Other: 18 x 24in. (45.7 x 61cm), Courtesy of the artist and Gallery Chuma, Charleston, South Carolina