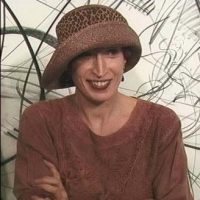 I graduated from the University of California at Santa Cruz and then went on for an MFA in painting from the University of Pennsylvania in 1985, and later earned a second MFA from the University of Maryland in digital media. My paintings have been included in the Corcoran Museum’s prestigious biannual survey of American painting in 1993. Around that time I began to explore issues in other media. While working at the University of Maryland my casual collaboration with Gillian Brown became more formal as we worked together on two major video installation projects. In 1999 we were awarded a fellowship from Harvard University, where we worked for a year on a technically and conceptually complex interactive video installation, Turnaround Time. In 2002, after two years teaching at Stetson University in Florida, I returned home to Washington DC.

My work is held in collections which include the San Francisco Museum of Art, the Corcoran Museum, the National Museum of Women in the Arts, the Gap Collection, the Artery Collection and others. It has been often reviewed in the Washington Post as well as the San Francisco Chronicle, Boston Globe, Art in America, Art Papers, and other publications. It has been reproduced in books and catalogs, most recently in a scholarly German survey of new media art, Grundkurs Kunst 4: Aktion, Kinetik, Neue Medien, by Michael Klant. I have taught art at University of Pennsylvania, University of California at Santa Cruz and University of Maryland, and taught digital art at the Art Institute of Phoenix and Stetson University.