Ida Ekblad studied at Central St. Martins College of Art, London, in 2001, before receiving a Bachelor of Arts Degree from The National Academy of Art, Oslo in 2005, and a Master of Fine Arts Degree in 2007. She also studied at The Mountain School of Arts, Los Angeles, in 2008. Her work has been shown throughout Europe, U.S. and Australia. She currently lives and works in Oslo. Recent solo exhibitions include Kunsthaus Hamburg, Germany (2017); Karma International, Los Angeles (2016); BALTIC Centre for Contemporary Art, Gateshead, UK (2015); Galerie Max Hetzler, Berlin (2015); Greene Naftali Gallery, New York (2014); National Museum of Norway-Museum of Contemporary Art, Oslo, Norway (2013); West London Projects, London (2011); Bergen Kunsthall, Bergen, Norway (2010); Alessandro DeMarch, Milan (2009); and The Journal Gallery, New York (2009). Her work is in the collections of Migros Museum für Gegenwartskunst, Zurich; Astrup Fearnley Museum of Modern Art, Oslo; and Zabludowicz Collection London/Sarvisalo/New York.
A common energy courses throughout Ekblad’s paintings and sculptures, which are marked by an abiding interest in color, shape, and line as well as history and time. Present in both media are twisted, interlocked forms that function on both aesthetic and metaphorical levels. While they may occasionally recall the work of Wassily Kandinsky or even Jean Dubuffet, the paintings primarily invoke the legacies of postwar abstraction and especially its Scandinavian incarnations, such as the proto-Situationist CoBrA group. The raw gestures and brute expression of Karel Appel and Asger Jorn’s work establishes a clear precedent for Ekblad’s practice, yet the younger artist makes them her own by synthesizing a painterly approach infused with bold lyricism, the occasional washed-out palette, and the dynamism of the city street. Her work invites the viewer to consider contemporary life not in its traditional pop language, but rather through the very energies that bring it into being. The painting, Stokksenvatnet, was inspired by Lake Stora Stokkavatnet in the municipality of Stavanger in Rogaland County, Norway. 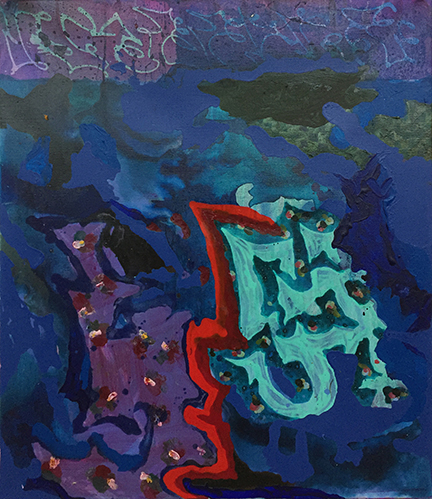