Born in Baltimore, Hugh Bolton Jones was a student at the Maryland Institute College of Art from 1865-76. Despite five years of travel abroad in 1876-81 to the village of Pont-Aven in Brittany popular among modern artists, such as Paul Gauguin and Vincent van Gogh, and then to North Africa, Jones continued to depict the wooded Maryland countryside in his painting after his eventual settling in New York in 1881. In Brittany and in Spain, he did sketching tours, and paintings resulting from his trip were shown in Baltimore in 1878. He later studied with Frederic Edwin Church, renowned Hudson River School painter, in Jamaica. Scholar Elizabeth Johns notes that Jones’ soft brushwork technique and light-colored palette reflect his travels abroad. Paintings by Jones are a part of the permanent collections of the Metropolitan Museum of Art in New York City and the Corcoran Gallery in Washington, D.C. 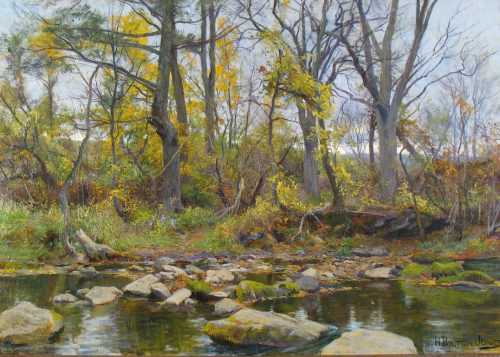