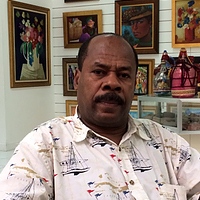 Henri was born in 1955 in Jeremie, the “Town of Poets” on the southwest tip of Haiti. He came to the Galerie Monnin in the mid-1970’s, the time when the movement known incorrectly as the School of Jacmel was evolving. This movement should be called the School of Monnin as it was the ateliers of that gallery on the Grand Rue that brought together the young artists of the third generation who worked and played together, and taught and learned from one another. With close encouragement from Michel Monnin, they developed brilliant techniques to combine with their bizarre imaginations. Jean-Marie Drot called them” sophisticated priimitives”. The atelier was unlocked day and night and depending on the hour, you might find, either painting or just visiting, the Blaise brothers, St. Louis, Serge and Fabolon, or Senatus, Dreux, Eric Jean-Louis, Calixte Henri, Carlo Jean-Jacques, Simil, Lamour, Fritz St. Jean, Avril Forest, Roland Blain, Delnatus and Mompremier, the Sanons from Jacmel, Murat St.Vil, Gerard Paul, Maurice Vital and others. 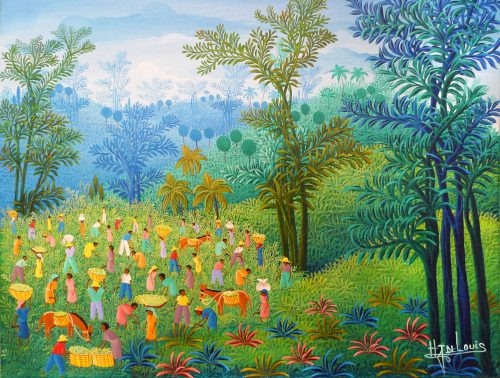