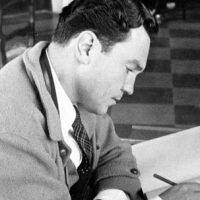 Born in Vernon, Illinois, Herbert Dickens Ryman graduated from Chicago Art Institute with honors before moving to Hollywood in 1932. He worked as a storyboard illustrator at Metro-Goldwyn-Mayer on such classics as Mutiny on the Bounty, David Copperfield, and The Good Earth. The latter film, set in China, inspired Herb to take a year off and travel the world. He chronicled his 1937 trip by recording his impressions in a sketchbook.

The next year, back in Los Angeles, Herb met Walt Disney for the first time at a gallery exhibit of his work. Walt was so impressed with the paintings on display that he invited Herb to join the Walt Disney Studio. While Herb went on to serve as an art director for such feature-length animated classics as Fantasia and Dumbo, Disneyland became the centerpiece of his Disney career. Among his contributions were designs for Main Street, U.S.A., Sleeping Beauty Castle and New Orleans Square. In 1988, his 1964 painting of New Orleans Square was selected by the State Department for display at the U.S. Embassy in Paris. Herb also contributed concepts for the Jungle Cruise, Pirates of the Caribbean, and for attractions featured at the 1964-65 New York World’s Fair, including Great Moments with Mr. Lincoln.

A prolific artist outside of Disney, Herb produced watercolors, oil paintings, acrylics, and charcoal sketches that were collected by such luminaries as Mrs. William Guggenheim, Cecil B. DeMille, and John and Lionel Barrymore.

Herb retired in 1971 only to return a few years later as a full-time consultant, sketching numerous conceptual drawings for EPCOT Center. His work for that park included detailed park renderings as well as inspirational paintings for the American Adventure and China pavilions, among others. He also developed the popular Hall of Presidents at Walt Disney World and the Meet the World attraction at Tokyo Disneyland.

Herb Ryman passed away in Los Angeles, while still at work on ideas for Disneyland Paris.