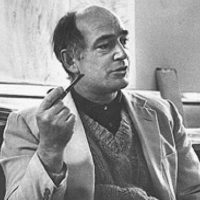 Harry Bertoia (b. March 10, 1915 in San Lorenzo, Pordenone, Italy. d. November 6, 1978 in Barto, Pennsylvania, United States), [1] was an Italian-born artist, sculptor, and modern furniture designer.
At the age of 15 he traveled from Italy to Detroit to visit his older brother, however he chose to stay and enrolled in Cass Technical High School, where he studied art and design and learned the art of handmade jewelry making. In 1938 he attended the Art School of the Detroit Society of Arts and Crafts, now known as the College for Creative Studies. The following year in 1937 he received a scholarship to study at the Cranbrook Academy of Art where he encountered Walter Gropius, Edmund N. Bacon and Ray and Charles Eames for the first time.

Opening his own metal workshop in 1939 he taught jewelry design and metal work. Later, as the war effort made metal a rare and very expensive commodity he began to focus his efforts on jewelry making, even designing and creating wedding rings for Charles and Ray Eames and Edmund Bacon’s wife Ruth. Later in 1943, he married Brigitta Valentiner, and moved to California to work for Charles and Ray at the Molded Plywood Division of the Evans Product Company. He worked for them until the war ended in September 1945.

In 1950, he moved to Pennsylvania, to establish a studio, and to work with Hans and Florence Knoll. (Florence was also a Cranbrook Graduate). During this period he designed five wire pieces that became known as the Bertoia Collection for Knoll. Among them the famous ‘Diamond chair’ a fluid, sculptural form made from a molded lattice work of welded steel.

In Bertoia’s own words, “If you look at these chairs, they are mainly made of air, like sculpture. Space passes right through them.”

They were produced with varying degrees of upholstery over their light grid-work, and they were handmade because a suitable mass production process could not be found. Unfortunately, the chair edge utilized two thin wires welded on either side of the mesh seat. This design had been granted a patent to the Eames for the wire chair produced by Herman Miller. Herman Miller eventually won and Bertoia & Knoll redesigned the seat edge, using a thicker, single wire, and grinding down the edge of the seat wires at a smooth angle – the same way the chairs are produced today. Nonetheless, the commercial success enjoyed by Bertoia’s diamond chair was immediate.

He had a son and two daughters, a grandson and two granddaughters, and two great grandsons so far. Some members of the subsequent two generations are engaged in artistic endeavors. He died of lung cancer at age of 63 on November 6, 1978. His wife Brigitta Valentiner died in 2007, aged 87.