Gretchen Raber is a German-trained goldsmith and metal artist who currently designs and creates her own art. She is a member-owner of Metallum, a studio of contemporary jewelry, at the Torpedo Factory Art Center, Alexandria, Virginia.

A former Assistant Professor of Metalwork at the Catholic University Summer Program, she has lectured widely including the Smithsonian Resident Associate Program, Visiting Professor of Metalwork at the Washington University at St. Louis Summer Institute, and Graduate level metalworking courses at the University of Virginia. She completed her BS with honors at the State University of New York at New Paltz, and her MFA at the American University in Washington, DC. She has trained as a goldsmith at the Kunst und Werkschule in Pforzheim, Germany, and she is a Louis Comfort Tiffany Foundation grant recipient. In 1991, she created and developed the metals program for the Art League School in Alexandria, Virginia.

In addition to publishing articles and reviews in Metalsmith Magazine and “Art Aurea,” her work has appeared in “Gold und Silber,” “American Craft,” and the books The History of Rings and Art Jewelry Today. Her work is also in several prominent private collections and in the permanent collection of the National Museum of Modern Art, Kyoto, Japan; the Kunstgewerbe Museum Preuszischer Kulturbesitz, Berlin, Germany; the American Craft Museum, New York City; The College at New Paltz Foundation, SUNY, New Paltz, New York and the White House Christmas ornament collection. 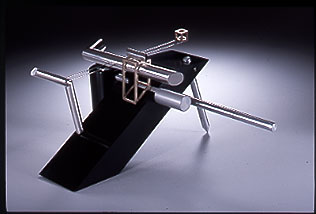