“Cramer was an artist and educator whose life and career stood at the intersection of European and American Indian cultures. He learned the symbols of his cross-cultural heritage from his Potawatomi grandmother. These ancient American Indian symbols often found their way into his work as a painter, sculptor, printmaker and pioneer in computer-generated imagery.

Born in Spring Arbor, Mich., in 1938, Cramer earned a bachelor of science degree in design at the University of Michigan and a master of fine arts degree at the University of Wisconsin-Madison. He pursued a parallel course of action, touching thousands of lives as a teacher and also winning recognition as an exhibited artist. His discovery of the potential of the computer as an art-making tool in 1986 revolutionized his thinking about art, and led to his being named head of the 3-D area in the UW-Madison’s art department. His classes in three-dimensional computer art and virtual reality galvanized dozens of students annually. Cramer taught at the University of Wisconsin-Madison from 1981 until the end of his life.

His works have been displayed at the Art Institute of Chicago, the Elvehjem Museum of Art in Madison, the University of Wisconsin-Milwaukee, the Wustum Museum of Fine Art in Racine, and Gallery Eude in Barcelona, Spain.”

Artists Statement: “I have chosen to work with images and processes that allow me to include many diverse opinions and visual vocabularies of often conflicting historical, tribal, and universal notions on the values of Art in our time.

I also seek to “stuff” an image as tightly as possible as I’ve seen done in the past by the artists of India (ie. Indian miniatures). The computer allows this effect for me to use in the construction of an image and at many levels and opportunities.

I feel the complexity of our social strivings and mechanizing that often seem unendurable and too frightening to be beautiful are not only beautiful, but orderable by artistic processes if numerous levels are used in the portrayal attempts thereby creating a “site” that is to me “life like” and may be “flooded” with emotion and seeing by the person(s) viewing the production as well as the artist alone. I often attempt to use the “landscape” format to create an ease for the viewer and to restate the honesty of the human condition as “natural”.

I also feel that artists have a responsibility to do the “best” that they are able no matter how difficult or even “bad” it is judged. I also feel that the “Arts” need to be re-discovered for their similarity of purpose and not for their modern specializations. I think that the “computer systems” are starting to allow this return to a human base and “to become” and “to happen” and in our time.” 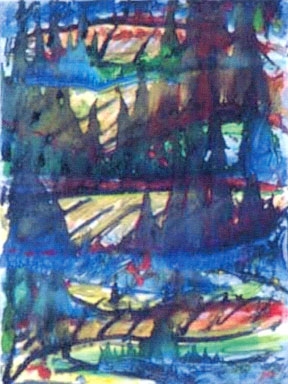 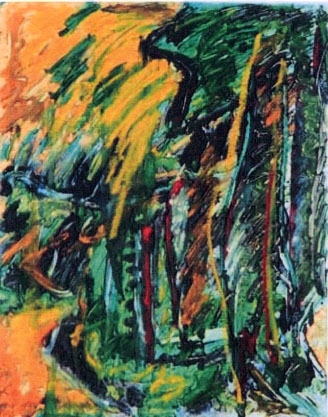