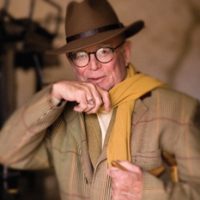 George Alexis Weymouth, known better as “Frolic” Weymouth, is an American artist, whip or stager, and conservationist. He lives in and protects the Brandywine Valley.

Weymouth’s early work, done in egg tempera, was often highly personal. His portrait of his grandfather, Eugene du Pont, features the fine detail of a herringbone suit coat and the worn fabric of a favorite recliner. His “The Way Back” (1963) is a self-portrait of only his hands guiding a single horse carriage up the lane to Big Bend, his home on the Brandywine.

Weymouth has painted portraits of Luciano Pavarotti (1982) and later, Prince Philip, Duke of Edinburgh (1995), Queen Elizabeth’s husband, which hangs in Windsor Castle. Weymouth was selected by NASA to paint at Cape Kennedy during the moon shots.

Through his circle of fellow artists, Weymouth became a close friend of Andrew and Jamie Wyeth. Weymouth was the confidant who discretely hid Andrew Wyeth’s nudes of Prussian-born neighbor and caretaker Helga Testorf for 17 years before they became public. In the 2004 documentary “The Way Back: A Portrait of George A. Weymouth,”Andrew Wyeth said he didn’t “know of anyone who means as much to me.”