Genevieve Wilson’s family moved to Cincinnati when she was an infant, so that her father could work in industry. The family visited ‘home’ in Casey County, Kentucky, for weekends as often as they could and moved back following World War II. Genevieve dropped out of high school because of illness in 1950 and got married in 1951, at age sixteen. Always artistically inclined, she painted off and on over the years, including a pair of paintings which were acquired for the KFAC Permanent Collection, which contrast her childhood Cincinnati neighborhood with the welcoming lights of her Kentucky ‘home.’ It was while she was recuperating from a near-fatal automobile wreck in 1988 that she began painting “in earnest.”

Ms. Wilson’s paintings present a variety of subject matter, especially memories of her childhood. She used to collect driftwood, along the banks of the Cumberland River, near her former home, which she painted without further carving or other alteration.

Widowed in the 1970s or 1980s, she was remarried around 2002, and lived with her new husband, Alvin Berry, near Corinth, Kentucky. 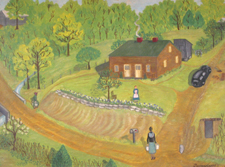