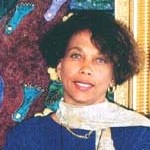 Genevieve Iris Esper is a Haitian Modernist who studied at L’Ecole Beaux Art in Paris and has an art degree in architecture. Iris did not begin painting until she was 33 and at 39 she is still called upon to execute the occasional structural design, but purely creative art is now her domain. The artist’s distinctive style shows architectural influences of Byzantine and medieval style, intricate geometric patterns and folk art symbols, these paintings all the while are executed in bold Haitian colors. Author, Marie Alice Theard explains in her book Haiti, la voie de nos silences, that Iris sets up correspondences with the compositions, decomposition, and re-compositions, naive or sophisticated, drawn from the abysses of vaudou. Her retina captures and transmits the signs, sacred symbols and forms of Taino heritage. She performs a descriptive execution of the western academic referrals. She also remembers Saint-Soleil. The heretic characters of her paintings, void of narrative content, give off the aspect of an Egyptian bas-relief. She has exhibited widely throughout Haiti, France, and Florida. Most recently, she has shown at the Espace Klee Gallery, Paris France, The United Nations, New York, and The Black Arts Festival in New York.
www.irislartiste.com