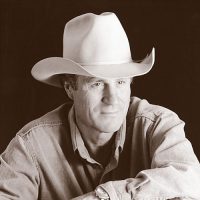 Gary Niblett was born and raised in Carlsbad, New Mexico. After graduation, he went on to California, where he attended the Art Center School of Design. He spent eight years with the Hanna-Barbera studios as a background artist, but continued to develop his own style. He met Monika while working for the studios and they were married in 1970. In 1973, Gary left commercial art to focus exclusively on Western art, and three years later was voted into the CAA. He returned to New Mexico, where his work continued to gain national recognition.

His work has been exhibited all over the world, including the Grand Palais, France and the Amerika Hass Berlin, Germany. He has also exhibited in Moscow, Taiwan, Beijing, and at the prestigious Royal Watercolor Society in London. Niblett’s work has been included in publications such as the International Fine Art Collector, Time, Saturday Review and New Mexico Magazine. In 1990, he was honored as the “Distinguished Calendar Artist” for New Mexico Magazine, and a book titled Gary Niblett—A New Look at the Old West was released. He has been given the honor of having a large oil hanging in the state capitol building in Santa Fe, New Mexico.

He works mostly in oil, but says he is “comfortable in watercolor.” Niblett’s art demands that we look into the reveries and still moments of the human spirit where the heart lives. His versatile work demonstrates the human values which are brought to bear in living, not only in the American West, but in the world.

He and Monika have lived in Santa Fe, New Mexico in their adobe-style home since 1980.