Described by some as naive art, Gabriel Cohen’s paintings portray fantastic landscapes, portraits, and biographical themes. They are characterized by an expanse of space and a multiplicity of images and conveyed in a decorative approach.

Gabriel Cohen was born in 1933, the sixth of the 11 children of Rivka and Yitzhak Cohen, who emigrated from Eretz, Israel, to France. During World War II, the family hid in the region of Brittany. Returning to Israel in 1949, they initially lived in an immigrants’ camp in Pardes Hannah and later settled in Jerusalem.

Cohen had various professions including diamond polishing. Having painted and sculpted in his youth, Cohen began painting again in 1972 while working as a night watchman. In 1974 he has his first solo exhibition at the Debel Gallery in Jerusalem. Following the 1980s, Cohen rarely exhibited his work. 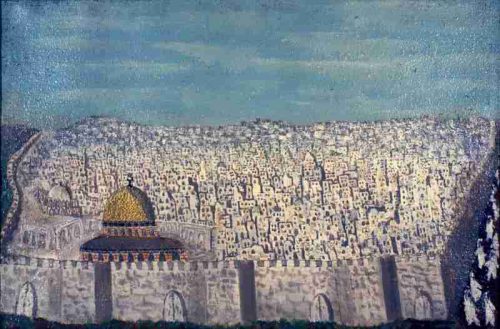