He entered the U.S. at Port Arthur, Texas in 1923. By 1924 he was in Chicago painting under the W.P.A. Artists policy and attending the Art Institute of Chicago (1925-27, 1929) and at the Arts Students League in New York. While in Chicago, Darge painted, made model sail boats, which was a interest he acquired in the German Merchant Marine at the age of 16. During this period, he made a painting trip with his wife and son through Minnesota and the Dakota’s.

By July of 1933 he had separated from his wife and son in Chicago and had settled in San Antonio as a Starving Artist. In 1935 he moved to Dallas, Texas where he finished his paintings during the Winter months and spent the Summers painting and sketching on Ranches in West Texas, mostly the area between the Davis Mountains and the Rio Grande and in New Mexico. Darge stated “I believe the simple, direct living of the pioneer people will soon come to an end. I want to register the ranchman as he lives today, his daily habits, his mode of living and doing business.”

He soon learned to follow the life of the hands on the ranches he visited and became adept at riding and roping and made himself handy around the campfires.

Darge entered the Army in 1942 and served in the South Pacific and was honorably discharged in March 1944. He worked for North American Aviation (defense industry) as a technical illustrator until wars end.

Darge returned to Dallas in 1946 and bought a W.W.II ambulance and converted it to an artists studio/van and spent the years 1946 to 1978 traveling and painting throughout Texas and New Mexico and returning to Dallas to finish his paintings, carve, build and sail his model boats.

His later years were spent at his studio adjacent to the Dallas Art Association where he also acted as an Instructor. 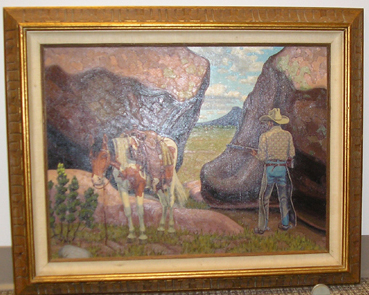