Franklin Price Knott was a trailblazing photographer — one of the first to have his color images appear in National Geographic magazine. A world traveler who logged hundreds of thousands of miles, he eventually settled into a stately home off Channel Drive. He had come a long way from his modest beginnings in rural Ohio.

Born in 1854, Knott was the 10th son of a father who moved from job to job, farm to farm, in an attempt to eke out a hardscrabble living for his family. Demonstrating artistic talent at a young age, Franklin won scholarships to two Massachusetts schools and eventually made his way to Europe for further study. In Paris, he married and began to carve out a successful career as a painter of miniature portraits. He then began having eye trouble and his wife urged him to take up the new field of color photography. What was initially a hobby became, within a few years, a new career that brought Knott international fame. Knott used the autochrome process of color photography, first marketed in France in 1907. In this process, potato-starch grains were dyed in primary colors and then deployed as a filter onto a photographic glass-plate negative. The process was difficult to master. Exposure times were very long; the glass plates were heavy and easily damaged; the camera equipment bulky. If one needed to go out into the field, suitcases of chemicals had to be dragged along and makeshift darkrooms erected for developing the plates. A travel photographer needed to be part artist and part pack mule.

The Knotts discovered Santa Barbara around 1905, when they stayed at the Potter Hotel. They soon were spending winters here and began buying up property around the South Coast, including land off Channel Drive. It was not until 1917 that they built their home on what is now Fairway Road. The house was razed in 2000.

In the April 1916 issue of National Geographic magazine, Editor Gilbert H. Grosvenor authored a paean to the wonders of the United States titled “The Land of the Best.” Accompanying the article were 23 autochromes by Franklin Price Knott. The images included one of the husband-and-wife team of modern dance, Ruth St. Denis and Ted Shawn, who appeared in Santa Barbara numerous times and under whom Martha Graham trained; an image of the Santa Barbara Mission; and a “Sunrise Setting the Morning Heavens on Fire” over West Beach and Stearns Wharf. Another series of autochromes, chronicling Knott’s travels in India, Holland, Tunisia, Algeria, and the U.S., appeared in the magazine in September. Knott’s wife died in 1926, and in the following year he took off at the age of 73 on perhaps his greatest adventure. The photographer embarked on an extended 40,000-mile tour of Japan, China, the Philippines, Bali, and India. All the while Knott was making autochromes for National Geographic and he captured some extremely rare views including the first color pictures of the royal court of Kashmir. He recalled his departure from Bali: “A heavy surf ran. To reach the ship’s boat, one had to wade out. I wrapped my precious autochrome plates in my raincoat and held them on my head to keep them dry and waded waist-deep against incoming breakers.”

Knott often exhibited his autochromes around Santa Barbara. One of the most memorable shows was held at the Potter Theatre in 1915 as a benefit for Cottage Hospital. This show included views from a 1913 motoring trip from Denver to Santa Barbara, quite a journey in that early age of the automobile. Knott succumbed to a heart attack in 1930. His autochrome work is considered a milestone in the history of color photography. 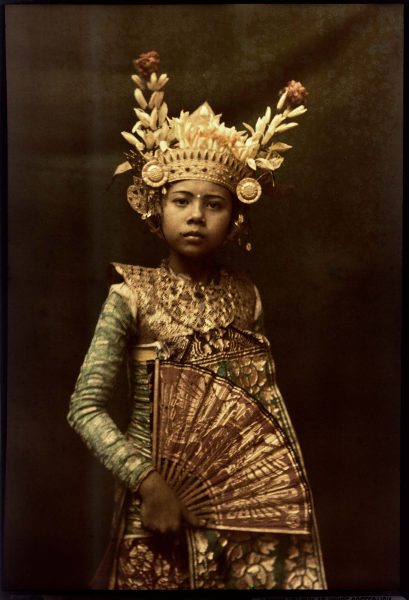 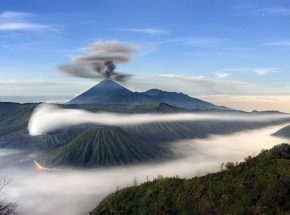