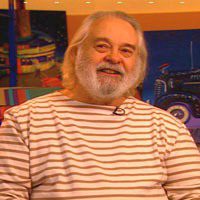 Throughout his 40 year career as an artist, Frank Romero has been a dedicated member of the Los Angeles arts community. As a member of the 1970s Chicano art collective, Los Four, Romero and fellow artists Carlos Almaraz, Beto de la Rocha and Gilbert Lujan, helped to define and promote the new awareness of La Raza through murals, publications and exhibitions. Los Four’s historic 1974 exhibition at the Los Angeles County Museum of Art was the country’s first show of Chicano art at a major art institution.
Since then, Romero has successfully balanced a career in both the public and private arenas. He has completed over 15 murals throughout the city, and was a key contributor to the 1984 Olympic Arts Festival with “Going to the Olympics,” a large scale mural which adorns one of Los Angeles’ busiest freeways (Highway 101). He recently restored this mural with a grant by the Amateur Athletic Foundation, as well as working on new murals for SPARC (Ritchie Valens Park in Pacoima) and North East Trees (along the Los Angeles River) and in Silverlake.
Romero has shown extensively in the United States, Europe and Japan. Notable exhibitions include: “Chicanarte” (L.A. Municipal Gallery), “Hispanic Art in the United States” (Corcoran Gallery, Washington D.C. and national tour), “Le Demon des Anges” (Nantes, France; Barcelona, Spain; Lund Sweden and Brussels, Belgium), and “American Kaleidoscope” (National Museum of American Art, Smithsonian Institution, Washington D.C.). His work is featured in many permanent collections, including the National Museum of Art in Washington D.C., the Los Angeles County Museum of Art, and the Carnegie Museum in Oxnard, CA.