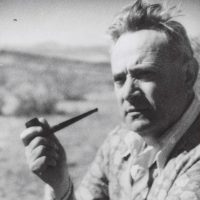 Landscape painter, illustrator. Born in Medoc, Missouri, Sayre worked in the lead and zinc mines and manufactured leather goods before settling on an art career. He remained a self-taught artist except for two months with J. Laurie Wallace in Omaha. His first creative job as an artist was an employee of and engraving company in Houston, TX. Ill with diphtheria, he moved to California in 1917. Traveling to California by train, he was enchanted with the Southwest desert and vowed to return which he did in 1919. For three years he lived in Arizona working for a mining company as a bookkeeper while painting in his leisure. Upon returning to California in 1922, he held his first art exhibition of 64 watercolors in San Francisco; later that year he exhibited at the Los Angeles County Museum of Art. In that year he moved to Los Angeles and two years later built a home and studio in Glendale where he remained for the rest of his life. Sayre is one of California’s best known painters of the deserts and the Southwest.