Born in Minnesota, Loran’s talent was recognized early when he won the Paris Prize in 1926 which entitled him to study in Paris for two years. The trip would prove a turning point in Loran’s life. In Paris he saw the works of Picasso and other European modernists. But it was Cezanne’s works that captured his heart. His fascination with that Post Impressionist master led him on a three-year odyssey through Cezanne country where Loran painted and photographed the countryside around Aix en Provence. So closely did he identify with Cezanne, that Loran arranged to live in his old house for three years. It was this experience that formed the basis for his later book Cezannes’ Composition – a classic and still used in college classrooms today.

Shortly after the conclusion of his Provencal sojourn, the University of California asked Loran to join the faculty at Berkeley. This was a fertile period for Loran, beginning with his studies with Hoffman who brought European modernist philosophy and techniques to the United States. The seed money for the construction of the University Art Museum came out of this collaboration.

Watercolor was Loran’s medium of choice because it dried fast and was lighter to transport to his often remote plein air locations. His landscapes of this period, often including a building or structure, are clean, fresh and spontaneous, using clear primary colors. Refined Oil Dock is a delightful period piece depicting an East Bay refinery in 1941. You see the modest brick buildings and shacks of the oil company silhouetted against the Golden Gate Bridge, a far cry from the behemoth metallic tanks and towers of today’ s refineries.

Loran was intrigued with the ghost towns of California and Nevada and traveled many times to Virginia City and Bodie to paint on location. Louis Siegriest of the Society of Six lived and painted there after the War. Virginia City, 1931, is a playful view of a deserted street lined with dilapidated brick and wooden storefronts straight out of the Wild West, but with a distinctly Modernistic feel.

The accompanying catalogue tells the story of Loran’ s transition from plein air painting to studio work. As the war in the Pacific intensified in the 1940’s, domestic tensions mounted. Landscape painters were often seen as suspicious figures and occasionally mistaken for spies. Following one particularly tense instance when he was detained by an armed soldier, Loran exasperated, decided to stop painting directly en plein air and concentrate on abstraction.

A Midwesterner, schooled in Europe, and a leader in the Bay Area art scene for six decades, Loran was influential in most of the American art movements of the 20th Century. Now in his 94th year, he continues to live in the East Bay hills. 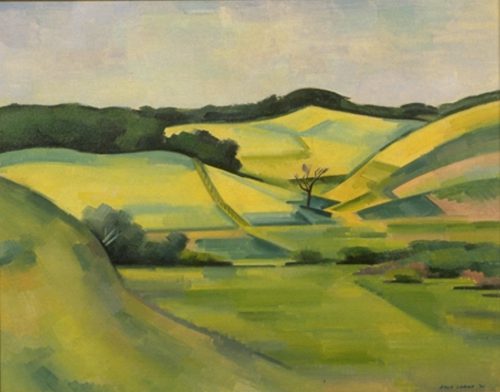