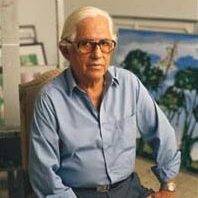 Enrique Tabara is one of the most important artists of the last century. He is an Ecuadorian painter of universal importance and Tabara shares that pedestal with teachers of the stature of Picasso, Joan Miro, Eduardo Kingman, Oswaldo Guayasamin, Felix Arauz, Rufino Tamayo and Juan Villafuerte, audacious creators and forjadores of a whole Latin American pictorial and artistic culture. Tabara took interest in painting at the age of three, was drawing regularly by the age of six and was strongly encouraged by both his sister and his mother. Enrique Tabara nevertheless is a creator who far from taking refuge in the comfortable finding of an image, that is to him his own, he investigates and demystifies his own image and finds refuge in her and a thousand and one images that engage in a dialog which is permanently renewed. That energetic and innovating spirit in Enrique Tabara is a constant that reveals the anxious and versatile spirit of the teacher. A master of experimentation, fully aware of his roots and the process that he has followed over the years, with an abundant mass of brilliant works to show for it.

In 1906, Georges Braque and Pablo Picasso led Cubism, the avant-garde art movement that greatly influenced both European painting and sculpture
and paved the way for Futurism and Constructivism. Around 1915, Constructivism was very big in Russia, led by Russian artist Vladimir Tatlin. Eventually, the Constructivist style made its wayinto Europe and Latin America and was embraced by Ecuadorian artist Manuel Rendon Seminario, who was a big inspiration for both Enrique Tabara and Anibal Villacis.

In 1946, Tabara attended the School of Fine Arts and was mentored by Germany|German artist Hans Michaelson and Guayaquileno artist, Luis Martinez
Serrano. In 1951, Tabara finished mastering the fundamentals and left art school. In 1955 the Ecuadorian government offered Tabara a scholoarship to study in Spain. Tabara’s work was welcomed with great success in Spain and Tabara befriended surrealist Andre Breton and Modernist painter Joan Miro. By 1959, Tabara’s work had gained a great deal of international attention and it came fast. Andre Breton asked Tabara to represent Spain in the Homage to Surrealism exhibition, among the works of Salvador Dali, Eugenio Granell and Joan Miro. Miro praised Tabara’s work and both artists had great respect for one another. In 1963, Tabara represented Ecuador together with Humberto More’ and Theo Constante at the Museum of Modern Art in Paris for the Third Biennial of Paris. By 1964, Tabara’s work was being shown in Laussane, Milan, Grenchen, Vienna, Lisbon, Munich, Barcelona, Madrid, Guayaquil, Quito, Washington, and Paris. On his return to Ecuador, Tabara returned to his roots through the Latin American current of “ancestralism”, which finds inspiration in pre-Hispanic cultures that inhabited the continent (third stage). Tabara is the first artist to usethe Pre-Colombian motif as a search for a new aesthetic.

Finally, Tabara started to paint simple shapes inspired in nature, and also other simple structures, such as his famed “patas-patas”, or feet-feet, and insects. Tabara is most known for his Patas-Patas works which contain legs with feet incorporated into the piece. When asked about this subject matter Tabara says that one day he was drawing a figure and he didn’t like it, so he ripped it up and the feet of the figure landed at his feet and thus his fate. Tabara is an artist who is in a constant, infinite search. He likes to experiment and live “pictorical adventures”. He believes that in art one has to pose difficult problems for oneself and solve them on the canvas. Today, Tabara is considered one of the most important artist of the last century. Tabara continues to paint with a vigorous spirit in his home town of Guayaquil, Ecuador. Barcelona is considered Tabara’s home away from home. 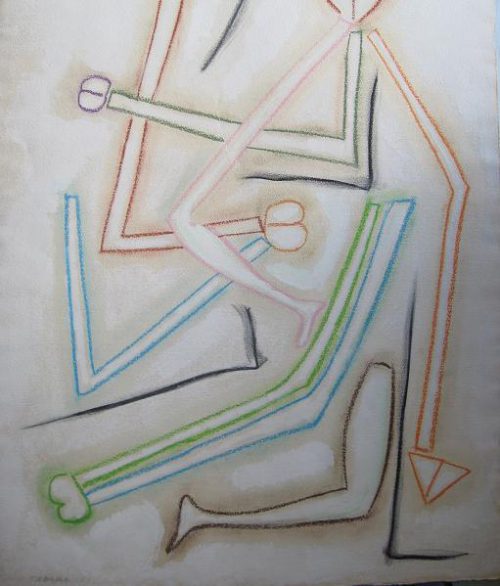