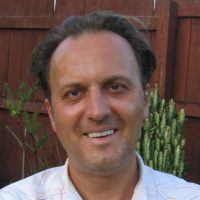 In his graphic work, Endi Poskovic invokes influences as disparate as early cinema, classic Japanese woodcut prints, devotional pictures, and Eastern European propaganda posters. By combining visual representation with text, Poskovic shifts the reading of the image by providing a new context for the viewer to continually reinterpret. Reminiscent of youthful whimsy and playful fantasy, the unsettling juxtapositions and invented constructions in Poskovic’s prints convey a sense of the habitual, like a window into the everyday reality of a different world. The hybridized narratives of toy-like objects and fantastic landscapes in Poskovic’s work imply stories from personal and social histories, referencing themes of displacement, shifting cultural identity, environmental transformation, migration, and alienation-all of which are presented in images that are as tragic as they are magnificent.

Endi Poskovic was born in Sarajevo, Bosnia and Herzegovina. From an early age he studied music and art, which eventually led to performances of traditional music and songs of the Balkans at festivals throughout Europe and the Middle East. Poskovic completed his B.F.A. at the University of Sarajevo Academy of Fine Arts in 1990. A Minnefindet Scholarship, funded by the Norwegian government, enabled him to live in Norway for a year to study art as well as the Nynorsk language and culture. From Norway, Poskovic moved to the United States to study with Harvey Breverman and Adele Henderson at the State University of New York at Buffalo, where he earned his M.F.A. in 1993.

Poskovic’s current series of lithographic prints and animations are a roman a’ clef reminiscing Mostar, a city with several distinct ethnic communities in Southern Bosnia and Herzegovina. Through faith in the process of drawing, the series offers a personal tale of displacement and discovery.