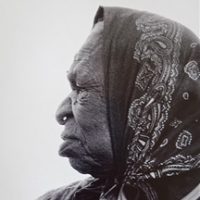 Emily Kame Kngwarreye (c1910 – 1996) was a senior member of the Anmatyerre community resident at Utopia, a former cattle station, now reclaimed by its Aboriginal landowners. She is widely regarded as one of the most notable Aboriginal artists of recent times and the pre-eminent female artist of the desert region. The remarkable painterly quality and conceptual originality of her work extended her influence well beyond the previous reach of contemporary Aboriginal art and attracted widespread international interest.

Emily Kngwarreye was born at Alhalkere in the northwest corner of Utopia Station, and grew up working on various cattle stations. She commenced painting on fabric in the batik technique in the late 1970’s, and produced her first painting on linen in 1988. She was the leader of a number of song cycles for particular women’s ceremonies. Her paintings were mostly based on Anmatyerre body designs and Dreaming sites especially associated with the emu, yam tubers and flowers.