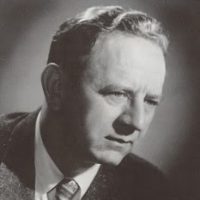 The son of a French artist, Emil Kosa Jr. came to the United States with his family at the age of four. He studied art at the California Art Institute in Los Angeles and at the Ecole des Beaux-Arts in Paris, France. Upon his return to Los Angeles, Kosa taught art at the Chouinard Art School and at Otis Art Institute.

A prolific painter in oils and watercolors, Kosa specialized in contemporary views of downtown Los Angeles and dramatic views of the rolling hills and farms around the city. He spent thirty-five years as a scenic artist and special effects painter in Hollywood, working for 20th Century Fox and other studios. He was well-respected in the movie industry and won an Academy Award for his role in the 1963 film epic “Cleopatra.”