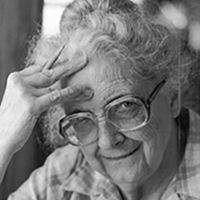 Elizabeth Layton, a native of Wellsville, Kansas began drawing in 1977 at the age of sixty-eight when she took a drawing class at a local university. In class she learned to use the technique of “blind” countour drawing in which the artist looks at the paper only for points of reference, concentrating on the subject reflected in the mirror rather than the line being drawn on the paper. Every day Layton worked at creating self-portraits that reflect her response to contemporary social issues. That fall, a local newspaper reporter, Don Lambert, was searching for an interesting subject for an article, and stumbled upon the class display at the college. Upon discovering the drawings of this “old woman from small-town America”, Don became her biggest fan – and promoter – and to this day continues to tirelessly promote her drawings and her story.
Layton comes from a family of writers and journalist and was herself managing editor of her hometown newspaper, The Wellsville Globe. The editorial content of her drawings reveals the influence of her journalism background. Following a divorce she raised five children, which perhaps explains her empathy for those who find themselves in situations beyond their control. She also suffered from bouts of depression for much of her life, which caused her to identify with those tormented by the pressures of modern society. Her work dispels the myths and misconceptions of old age. She examines personally and unexpectedly painful subject matter that rejects the stereotypical image of a grandmother. These drawing reveal the expectations of the wide-eyed child, the young girl filled with vitality, the wife and lover, the nurturing parent, and a strong-willed and opinionated social activist. Elizabeth Layton was struggling with bi-polar illness and profound depression when she began contour drawing, and art became more than therapy for this Wellsville, Kansas, Native – it saved her life. Her drawings and writings have enriched the lives of countless others and have been exhibited at the Smithsonian’s National Museum of American Art, and in more than 200 art museums and centers throughout the U.S.