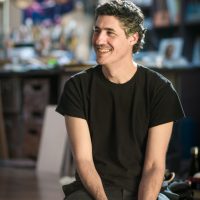 Edward Minoff is an American realist who has carved out a niche for himself as a painter of seascapes. His images are almost photorealistic but also have a strikingly moody, even romantic, quality. Unlike so many of his contemporaries, Minoff is not afraid to infuse beauty into his paintings; one could even say that beauty itself is the subject of his paintings. Works like Shorebreak celebrate the sea, evoking the awe and wonder one feels when pondering the tremendous mystery and beauty of the natural world.

Writing about his process, Minoff says, “I set out to paint a monumental seascape in the vein of the great nineteenth century landscape painters who made the element of scale so prominent in their work. I wanted to paint a scene that would surround the beholder—to allow the viewer to become lost in this invented environment when standing in front of the canvas.” Waves and clouds and sea mist envelop the viewer, and there is no relief from the nearly endless expanse of sea. Minoff’s imagined space is so enticing that, indeed, no relief is wanted. 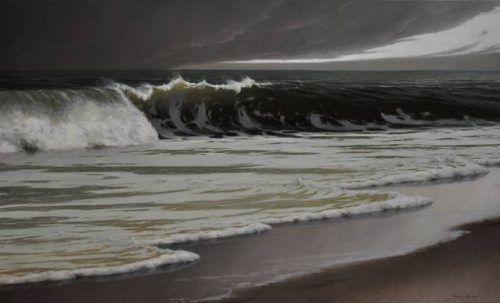