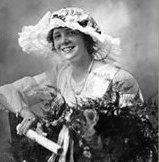 The following information was submitted in March of 2006 by Paul Lyle Bongé:

Dusti was from the late 40’s a close friend of Betty Parson’s and continued to be until Betty’s death. Betty included Dusti in her stable of Abstract Expressionists from the very beginning. My grandmother painted with Theodoros Stamos, Kenzo Okada, Mark Rothko (a personal friend) and knew them all quite well. She was once prevailed upon by Betty to move back to NYC and Betty said she would make her as famous as any of the men in her stable (my grandmother was one of the very few women at the time being given one man shows at Betty’s) but after some time my grandmother tired of hosting quaint little “let’s meet the bohemian woman painter in her studio parties” and moved back to Biloxi to paint in peace which she did tirelessly almost every day until her death in 1993. She had been in small group shows and one man shows at Betty Parsons from the 50’s until the mid 70’s when she retired from showing.

She was born the youngest child of Orcenith George Swetman and Eunice Lyle. Her father O.G. Swetman was one of the 3 founding members of The Peoples Bank of Biloxi in 1896 and would shortly thereafter assume control with a sizable majority of the stock. Dusti was ever the independent one, assertive and “Tom-boyish” and from early childhood acquired the moniker that would come to replace her first name. She was forever covered in dust and sand from the beach and dirt from “God only knew where” and Dusti just seemed to suit her.

She wrote and directed and performed plays for the neighborhood children and adults, and fashioned a stage in the breezeway and front porch of the family home. This being her passion and much frowned upon when she didn’t grow out of it, she struck a deal with her parents that if they would let her go to a drama school she would first complete college. She graduated a precocious flame headed strawberry blonde 16 year old from high school and attended Blue Mountain College for girls. Really, at the time, the only avenue for higher education for women in Mississippi was Blue Mountain, and it was not necessarily all that challenging a school.

She attended with the firm belief, which she drummed into each following generations, that the school or the professors mattered not in the least and that anyone could get a fine education as long as the school had a library. She was a formidable intellect and reasoning that she got double credits for theology classes, took as many as she was allowed and attended two installments of summer school each summer. Leaving very few holidays or days off, she completed the 4 year curriculum in just under 2 years.

My great grandfather, seemingly foiled by Dusti’s headlong rush and satisfactory fulfillment of the contract, remained steadfastly opposed to Dusti’s path, though really powerless to do anything about it. Dusti headed to Chicago to study acting. She quickly gained the stage and traveled extensively with shows in the early years of her career. She was a fixture on the New York stage and did early film work when studios were still based on Long Island. One of the things that has always connected me in an intimate way with another actress of the time and ours, happened in the late 20’s. Dusti was the lead in a play, which I’ve sadly forgotten the name of, when she discovered she was pregnant with my father. She immediately withdrew and never acted again. The woman brought in to replace her, for the quality of her work and the amazing physical and personality likeness, was none other than Kate Hepburn. Their lives now diverging, Kate’s into films firmament of stars and Dusti’s into comparative oblivion, couldn’t have been more alike. Both these women lived their own lives the way they saw fit and refused to conform to societies expectations for women of the time. Their speech, inflections and accents were eerily similar and their likenesses didn’t end there. Suffice to say that I’ve always felt as though I had two grandmothers and the connections to them were immutable. One I knew intimately and the other only casually.

Except for a short period after the death of my grandfather in 1936, Dusti’s painting could never be characterized as regionalism or modern landscapes. Yes, for a short while as she developed her own style and grew into what she was to remain for 50 + years, she did explore the local waterfronts and flora and fauna for subject matter. This was as she said more to train her hand and eye than to create serious work. Much of what she did though must be taken seriously as it is a legitimate and original expression and hardly derivative of anyone else. In the 40’s she became much more the surrealist and by the late 40’s and early 50’s she was firmly and undeniably an abstract expressionist. Nothing from the 40’s to the end could be confused with anything regional or landscape inspired. 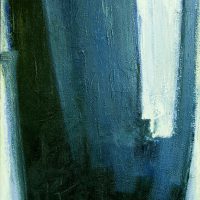