Duncan Johnson earned a BFA at Pratt Institute in 1987 and lives and works in Vermont. He was awarded a Pollack Krasner Foundation Artist Grant in 2010, an Academy of Arts and Letters award in 2009 and an Individual Artist Grant from the Vermont Arts Council, also in 2009. Johnson has exhibited in museums and art centers including the Bronx Museum of the Arts, Bronx, NY, Jacksonville Museum of Contemporary Art, Jacksonville FL, Brattleboro Museum of Art, Brattleboro VT, Sam Houston Memorial Museum, Huntsville TX, Museum of Art University of NH, Durham NH, Lichtenstein Center for the Arts, Pittsfield MA, Rosewood Art Center, Kettring OH, and Pelham Arts Center, Pelham NY, among others. Johnson has exhibited at Marcia Wood Gallery since 1996.

Duncan Johnson has been in conversation with wood since he was a small child. From his earliest obsession with gluing sticks of wood together to today’s mastery of craft and signature aesthetic, the inherent beauty and qualities of wood has been Johnson’s medium of expression. Working with reclaimed wood that he finds in his home state of Vermont, Johnson has been known for arresting sculptural works puzzling countless bits of wood into elegant organic forms. In the last few years Johnson has made a departure from the 3-dimensional to the 2-dimensional in the form of assembled paintings. Using found wood with the original color maintained, Johnson precisely mills strips of wood and assembles them into enigmatic, loosely geometric compositions. “ Johnson reveals his talents as a colorist in his adroit use of the paint, texture and patina of the wood strips. The suggestion of past life in these faded colors and scraped surfaces bring a vague poignancy to he work. If there’s a subtext, however, it’s the poetry of the well-made object.” Cathy Fox, Atlanta Journal-Constitution, 2009. The long thin strips of wood placed side by side create stripes that slide into and out of each other organically and with a sense of rushing vertical movement. The entire field of pattern and color is overlaid with a grid of tiny silver brads that have the effect of stitching or netting. The contrast of the precisely applied delicate silver webbing over the warmth and richness of the wood below emphasizes the ambiguity of scale and weight, opening the door to a range of interpretations. “Johnson’s new works are paintings in the same way that Robert Rauschenberg’s combine paintings of the late 1950’s were. Though emphatically assembled out of wood, they are composed according to the intuitive logic of abstract painting.” 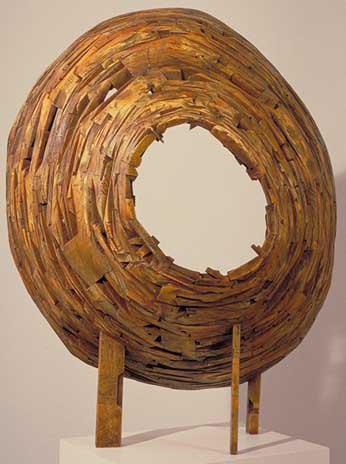 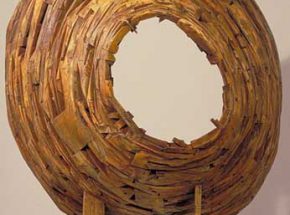